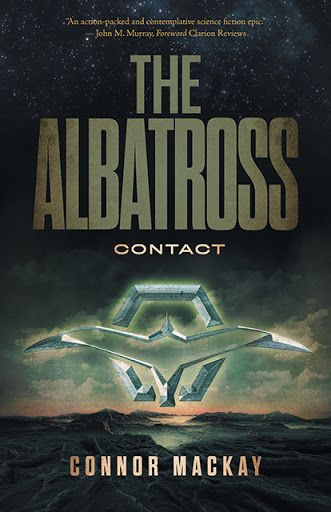 Present day Earth’s first contact with an advanced extraterrestrial race doesn’t go how people thought it would. There’s no invasion, no unfortunate probes, and no misunderstanding. The Lumenarians have come desperately seeking our help. Light years away in the Large Magellanic Cloud, a shadowy race known as the Forsaken is decimating their people, and the Lumenarians have arrived on Earth to recruit humankind as soldiers. Equipped with new weaponry and biotechnology that gives them devastating abilities, the Terran volunteers are thrust into the middle of a vicious interstellar war begun when people were still firing muskets.

Follow Will Reach, a damaged ex-special forces alcoholic with nothing to lose; Sarah Li, one of Earth’s brightest minds trying to find her place in the stars; and Arthur, the enigmatic alien leader of the recruitment mission and commander of the flagship, Albatross.

But with inner demons, inter-species struggles, and self-doubt plaguing the human/Lumenarian alliance, their ability to overcome the Forsaken looks increasingly grim as the battle looms near.

"In Mackay’s debut military–SF series starter, an endangered alien race makes contact with Earth and asks its inhabitants for a favor.

John Ringo’s Legacy of the Aldenata series, among other books, has depicted Earth natives serving as military support for embattled extraterrestrials. Mackay takes this premise back to basic training in a big way, however, addressing soldiers’ PTSD and malaise (Joe Haldeman’s classic 1974 novel The Forever War is a stated influence) and their combat strategy (à la Robert A. Heinlein’s 1959 novel Starship Troopers).

In addition to plenty of action, Mackay adds the timely notion of a terroristic human-supremacist movement and reveals the existence of a similar group among the Lumenarians. As the Samuel Taylor Coleridge–inspired title might signify, there are also several literary shout-outs—and a few Lucasfilm hat tips, as well.

A stirring adventure tale that adds considerable shock and awe to a familiar setup."

"Connor Mackay’s space epic The Albatross: Contact examines the mental cost of war as humans and aliens unite against a threat that seems unstoppable.

The world is built, and characters are developed, at a mesmerizing, slow-burn pace. The humans board the ship and spend the bulk of the story training and learning in a unique situation. Amid strange technology and even stranger alien beings, Will relies on pop culture references for deflection, to prevent himself from feeling real trauma. These references also help to maintain a balance between the book’s human and alien influences.

An explosive climax, and a mystery involving a mysterious figure, Mason, help to wrap up this volume of the story while leaving room for future books. Providing fertile ground for a new series, The Albatross: Contact is an action-packed and contemplative science fiction epic."

Connor Mackay is a former wildland firefighter and carpenter. An actor, poet, and playwright; his plays, Sunday Gunday and Heaven Adjacent, were produced in LA in 2018. Contact is Connor’s debut novel and the first in the Albatross series. He currently lives in Vancouver, BC.

The Albatross will be available in the FriesenPress Bookstore soon.