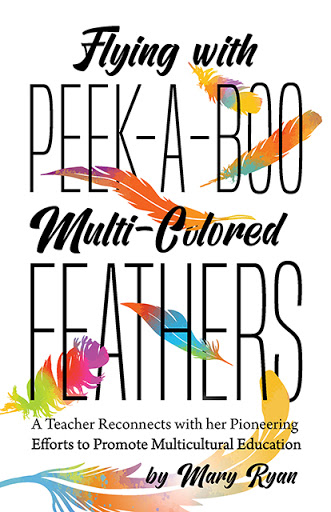 Students learning how to witness the best version of themselves was an important aspect of pioneering multicultural education. I wanted the children to learn the larger truth about how the knowledge of themselves and others can spin into arguments and judgments. Unlearning something when new facts reveal that an original assumption is outdated or not factual is good! While human skin comes in a variety of shades, we all share the same color bones and the same color blood. The purpose of my book, “Flying

With Peek-a-Boo Multicolored Feathers” is to share, based on my personal experience as a classroom teacher, what it is like in a classroom setting to develop in students a better awareness, knowledge, understanding and appreciation of our Canadian identity. The clinical conclusions indicate that when students are introduced and interact with people of various cultural traditions and religions as members of a family who shop at the same stores, enjoys TV and sports every bit as much as they do, the students increase by a measurable margin a better appreciation of our various Canadian traditions. Most importantly, the students also gain in self-esteem in a measurable margin.

"When I first met Mary Ryan, I was a young immigrant. I had no family or friends to guide and support me. In the 70’s there were very few visible minority children in schools in NB. Besides being my son’s teacher Mary became my teacher, who helped me to become confident in being proud of my heritage and a confident public speaker on racial discrimination. I also became proud of Mary’s students who became known as Jr. Ambassadors who articulated their pride in their Canadian citizenship. Later on Mary assisted new immigrants to form the first Multicultural Association Canada"

"I hope the essence of what is expressed in this book will develop a better awareness, knowledge, understanding and appreciation of the cultural diversity found in Canadian society. Inviting members of Indigenous families into her classroom, to interact with her students, was an important step in attempting to lower the volume of prejudice expressed toward Indigenous children.”

Mary Ryan grew up in the west side of the bustling city of Saint John, New Brunswick where she established her roots and began her life long interest and love of her neighbors of various cultures, traditions and religions.So it became easy for her to begin her teaching career with the focus of proving that when children wereintroduced to people of various cultures, traditions and religions, the children would not only experience a change in their attitudes, but amazingly, also indicate a change in themselves, leading toward a higher self-esteem.

For her efforts, to continue to work toward such remarkable changes, Mary was honored by the Governor General in Rideau Hall in Ottawa in 1978. Mary was also nominated for a National Citizenship Award by the Mayor and City Council of Fredericton, New Brunswick. and received the award on April 13th, 1993.