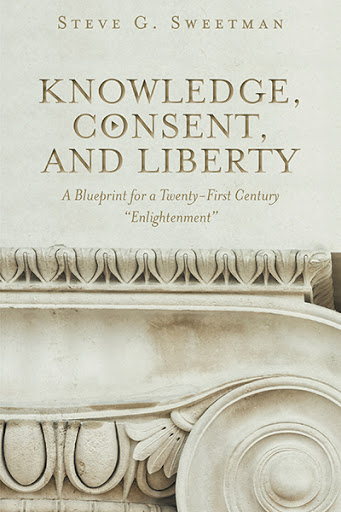 Knowledge, Consent, and Liberty
A Blueprint for a Twenty-First Century "Enlightenment"
by Steve G. Sweetman

The angst of modernity is that of powerlessness, disenfranchisement, and alienation. People everywhere are experiencing helplessness in a world where the few rule, and leaders and legislators run roughshod over the masses with a deluge of laws, and where technology encroaches upon their daily lives and privacy, and an economic inequality never before seen in history. The concepts of self-determination; destroying superstition; government by the people; questioning all authority; and the power of knowledge, reason, and the authority of the individual is on the verge of dying. However, as Thomas Paine said, “We have it in our power to begin the world over again.”

Today’s world cries out for a new breed of thinker—rational, brave, bold, innovative, intuitive, and artistic. We all need to re-evaluate—to become questioners, explorers, and seekers. Knowledge, Consent, and Liberty is about the power of knowledge; the supremacy of the consent of the governed; the legal and Constitutional right of the people of the globe to form their definitions of liberty, freedom, and government; and their obligation to create their collective destiny. Its lofty goal is to challenge, empower, and enlighten the reader. In a logical progression from premises to conclusions, it lays out a philosophical, historical, and scientific argument that humans create their world for good or bad. It expounds on current social, political, and cultural issues that deserve consideration for reform or change. And it maps out a constitutional strategy and method for “the people” to create America, and the world, in their own image rather than that of a few oligarchs.

Steve G. Sweetman is a Vietnam era veteran, a retired paramedic firefighter of twenty-five years, a local politician, a ship’s captain, an award-winning public speaker, and a university professor who teaches American and World history, philosophy, humanities, and pre-hospital emergency medicine. He wrote this book to fulfill one objective: to stir up in the reader that sense of wonder that causes one to question everything and discover again that curiosity he or she was born with, which has been stripped away by society’s demand for conformity. Steve lives in Florida.