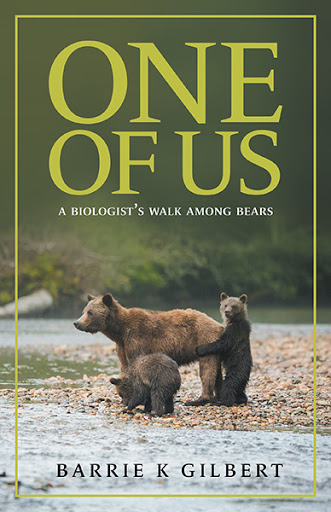 Barrie Gilbert’s fascination with grizzly bears almost got him killed in Yellowstone National Park. He recovered, returned to fieldwork and devoted the next several decades to understanding and protecting these often-maligned giants. He has spent thousands of hours among wild grizzlies in Yosemite and Yellowstone national parks, Alberta, coastal British Columbia, and along Brooks River in Alaska’s Katmai National Park, where hundreds of people gather to watch dozens of grizzlies feast on salmon. His research has centered on how bears respond to people and each other, with a focus on how to keep humans and bears safe.

Drawn from his decades of experience, One of Us: A Biologist’s Walk Among Bears explodes myths that depict grizzlies as bloodthirsty beasts that “kill for pleasure” and reveals the intelligent, adaptable side of these astonishingly social animals. He also explains their pivotal role in maintaining and protecting their fragile ecosystems. Accordingly, Gilbert pulls no punches when outlining threats to bear conservation. Most importantly, this book extolls a new way of appreciating grizzly bears, the same way we regard wolves, whales, chimpanzees, and gorillas.

Barrie Gilbert is probably the most experienced, credible grizzly bear biologist working on the planet today. He met his first grizzlies as a young biologist in Yellowstone, where a mother defending her cubs mauled half his face off, including one eye. Yet he loves this animal and has spent his life studying and defending the great bear. His time observing grizzly behavior in Alaska, Canada and the Northern Rockies exceeds any living researcher and places Dr. Gilbert in the rare company of our greatest naturalists, reminiscent of the Murie brothers. Here is the grizzly book, packed with incredible knowledge, to trust.

When a person’s first encounter with a creature is a disfiguring mauling from which he miraculously survives, it would be reasonable to expect what follows would be lifelong fear, even hatred. But this book is written by such a man, yet lifelong fascination, even admiration remained his career path. Knowing that, you’d expect such a person who could survive and remain fascinated to be exceptionally level-headed. And he is. If he then wrote a book about his life with bears, you’d expect that book to be incredibly insightful, thorough, and yet lacking exaggeration. This book you’re holding is that book. Barrie Gilbert considers bears to be ‘the chimpanzees of the carnivore world.’ And in this book, one very intelligent creature has met another, their lives have intertwined, and this work is the fascinating result.

—Carl Safina, author of Beyond Words; What Animals Think and Feel

How amazing to read in a single enthralled sitting the work of a lifetime. Dr. Barrie Gilbert, like the Craigheads and Muries, has spent a lifetime being with bears in the wilderness, and in so doing has learned about not just bears, but all the comings and goings of a world that is intimately connected to them in every season. I’ve been waiting for this book from him for more than forty years. As mythical as the tale of Jonah and the whale, it does not disappoint. This book crackles with intelligence and its more advanced counterpart, wisdom.

Born in Kingston, Ontario, Barrie Gilbert graduated with a degree in biology from Queen’s University, going on to earn a PhD in zoology from Duke University. After a stint as an Alberta wildlife research biologist, he joined the faculty of Utah State University, where he taught courses on animal behavior, wildlife management and endangered species. His research interests include human-wildlife interactions, especially the three species of North American bears; studies of dolphin communication; and ungulate behavior. Since retiring, Dr. Gilbert has focused on bringing ecological insights to conservation of threatened species and habitats. His hobbies include photography, sailing, mountain biking, and physical fitness.