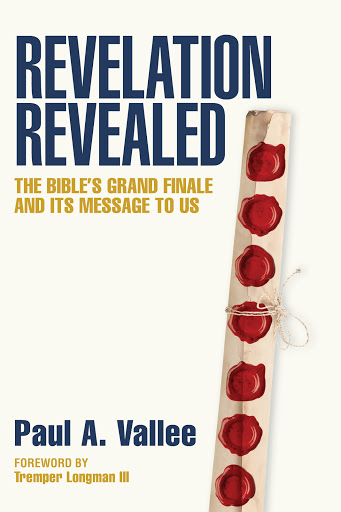 Revelation Revealed
The Bible's Grand Finale and its Message to Us.
by Dr. Paul A Vallee

In popular culture, the focus of the biblical book of Revelation has been on the identity of the antichrist and the end of the world. Though Revelation speaks to these issues, the book is primarily about Christ and how he addresses humanity’s enemies, including our greatest enemy, death. Revelation Revealed is an expository commentary that pushes through popular misconceptions and explains Revelation in a clear and engaging manner. Often viewed as a confusing book that is difficult to understand, filled with all kinds of incredible imagery, Revelation actually brings a message of hope in times of perplexity and crisis. In Revelation Revealed, Dr. Paul A. Vallee addresses the cultural background in which the ancient readers understood the text and shows the relevancy of that message to today’s readers.

This book is the culmination of forty years of biblical study. The content was originally presented to a live audience over the course of twenty-six weeks. The response encouraged Dr. Vallee to put into print what the audience described as a positive message, clarifying and removing misunderstandings and fear by instilling hope in a world that, like the book of Revelation itself, is often confusing and overwhelming.

“Revelation Revealed: The Bible’s Grand Finale and its Message to Us,” is a “must read” for anyone who loves the bible and would like an “easy to grasp” yet highly insightful understanding of the book of Revelation and how it should apply to our lives. Paul Vallee is a scholar and Pastor who, with much prayer and research, presents the contents of this very important (and often misunderstood) book to us with clarity and full of hope. I highly endorse ‘Revelation Revealed’ to you.

—Rev David Arrol Macfarlane is a former Director with Billy Graham Canada and an international speaker.

Dr. Paul Vallee’s extensive study and research work leaps off the page to give us a wealth of information and inspiration. Dr. Vallee removes the distorted view of the book of Revelation, and giving a biblical, balanced view in a simple language. Without hesitation, I recommend this book and the author.

Dr. Paul A. Vallee has been a pastor for thirty-seven years communicating the Bible’s message to a live audience. He has also worked on graduate and post-graduate courses and graduated from a number of theological institutions. In addition to his studies, Dr. Vallee has traveled to many parts of the world where the stories of the Bible transpired. This has given him tremendous insight into the Ancient Near Eastern world, which has helped him understand the implications of the Bible’s message for the first hearers and how that message applies to people today. Dr. Vallee lives in Red Deer, Alberta, with his wife Patty and are parents of two daughters, Andrea (Curtis) and Rachel; with two grandchildren, Ariella and Ezra. Revelation Revealed is his first book.