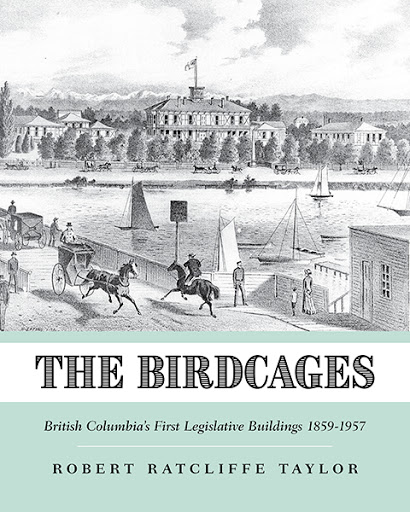 Revealing a little-known chapter in the history of Victoria, British Columbia, The Birdcages, the province’s first legislative buildings, were built 1859-1864, the formative, tumultuous time of the Gold Rushes. Constructed on the site of the present Legislature, they were built amid controversy and derided for their style. The brainchild of Governor James Douglas, they resembled, according to journalist/politician Amor de Cosmos, “something between a Dutch toy and a Chinese pagoda.” Readers will discover how civil servants and politicians felt about them as a workplace and what the general public thought about them as civic architecture. The career of their designer, the mysterious Hermann Otto Tiedemann, one of Victoria’s vivid early “characters,” is recounted as are the contributions of local contractors and tradesmen. The site of events of national importance until their demise in 1898, the Birdcages reflected the history, character, and heritage of Victoria and played an important role in the developing political traditions of the province and the young Dominion of Canada. A place for political demonstrations and community celebrations, the House of Assembly was where the MLAs debated joining Confederation, granting the vote to women, and excluding Asian immigrants. Based on personal memoirs and letters, government documents, photographs and plans, this book will interest both students and adults, history buffs and professional historians.

A Native of Victoria BC, Rob Taylor attended school there before going on to the University of Victoria (Victoria College), the University of British Columbia (BA History and English, MA History), Hamburg University, and Stanford University (PhD History). In St. Catharines, Ontario, he taught European History at Brock University, where he is Professor emeritus. He has published on German architecture and on the history of St Catharines and Victoria. He has also co-authored histories of the Welland Canals. Interested in how we react to our built environment, he was a co- founder of the Welland Canals Preservation Association and founding secretary of the Canadian Canal Society, and served on St Catharines Local Architecture Conservation Advisory Committee. He was active in the Niagara Opera Guild and Torch International. He lives in Victoria, where he has worked as a docent at the Art Gallery of Greater Victoria.