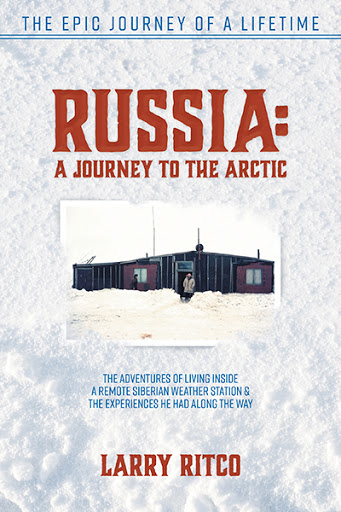 Russia
A Journey to the Arctic
by Larry Ritco

In 1994 Larry Ritco was given the opportunity to travel to northern Russia just inside the Arctic Circle on an engineering assignment for a Gazprom gas pipeline project.

On the shores of Baydaratskaya Bay at a remote Siberian weather station, Larry shares with us his adventures, and sometimes misadventures, of living, eating and sleeping alongside the Russian drillers, the weather personnel, Alex the cook, and Gypsy the castaway dog.

Excerpts from his daily diary provide us with a day-to-day glimpse of some of the personal challenges and decisions he faced on his encounters with the unknown and unexpected.

From flying in luxury in modern commercial airlines, business class, to enduring the cramped conditions of a cargo plane, sitting amongst its cargo, then flying in noisy, large Sikorsky helicopters, the journey to the north, which should have taken only four days, took nine (it would have taken longer if dog sleds were needed)!

Not only was it the destination, but also the journey, that left Larry with a lifetime of memories.

Larry Ritco's breakthrough from his boring nine-to-five job, and theme of this book, came in 1994 when he was given the opportunity to be part of a six-man observation team and head to northern Russia to the shores of Baydaratskaya Bay.

With an eclectic sense of humor, Ritco writes about his travels, and the "not so funny at the time, but funny now" experiences he had along the way.

Born in Oliver, British Columbia in 1958 and raised in the Okanagan Valley, Ritco decided on a career in Civil Engineering and attend Okanagan College. After spending fourteen years in Calgary doing engineering work, this opportunity came along.

His inspiration to write this book came four years later, in 1998, after talking to his lady friend in High River, Alberta at a local restaurant....It took Ritco only twenty years to follow up on her suggestion and finally write this book!

Russia will be available in the FriesenPress Bookstore soon.