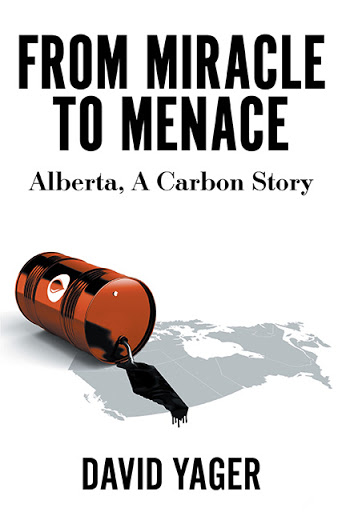 From Miracle to Menace
Alberta, A Carbon Story
by David Yager

A miracle. Coal, oil and natural gas, the carbon-based fossil fuels that powered the Industrial Revolution and civilization’s rapid advancement.

A menace. Climate change has how convinced many that carbon emissions are the world’s greatest challenge.

The necessity and benefits of decarbonizing the global industrial and energy complex are well articulated. What is not explained is this will require the largest financial disruption in history, affecting everyone and everything.

For over a century Alberta’s massive carbon resources have supported Alberta and Canada financially, helping make Canada the world’s fifth-largest oil and gas producer. Carbon has been a major driver of prosperity, employment and opportunity, shaping the country we know today.

However, climate change is creating enormous challenges for Alberta - and Canada - with no possible outcomes that will satisfy all stakeholders.

Alberta has become ground zero for the changes many demand but few are willing to pay for. As the province demonstrates what carbon’s future looks and feels like, unless the rest of the world participates Alberta has become a needless sacrifice.

From Miracle to Menace explains how Alberta came to be, the enormity of the planned financial dislocation, and how Alberta, and Canada, can meet the climate challenge without committing economic suicide.

A resident and native of Calgary, Alberta, David Yager was born into Alberta’s oil and gas industry. An entrepreneur since 1979, he has been a founder, executive and director of three successful TSX-listed oilfield service companies.

David’s journalism career began 40 years ago as co-owner of an oilfield trade magazine. For decades he has been analysing and writing about oil and gas, politics and energy policy. He remains a frequent contributor to trade publications, newspapers, radio and television and has written background papers and policy positions for oil service trade associations since 1991.

In his working career, David has progressed from the remote oilfields to the corner office. As a former oilfield worker and an employer of hundreds more, his perspective has always been bottoms-up; the people not just the products.

From Miracle to Menace is David Yager’s first book.