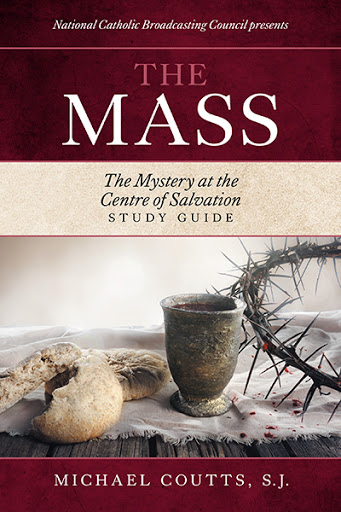 “The Eucharistic Celebration is much more than a simple banquet: it is exactly the memorial of Jesus’ Pascal Sacrifice, the mystery at the centre of salvation …”

Many Catholics attend Mass regularly but lack a deep understanding of the “mystery” at the centre of our salvation, and many younger Catholics don’t even understand why we gather as a community. The Mass: The Mystery at the Centre of Salvation Study Guide serves as a resource for Catholics who want to pass along the faith to others. Fr. Coutts takes us on a journey that starts in the Upper Room where Jesus met with his disciples and broke the bread, saying, “This is my body,” and blessed the wine, promising, “This is my blood of the covenant.” From there we travel with Jesus to the Garden of Gethsemane, where he drinks from the cup of consummation. The journey concludes with a reflection on our current-day celebration of the Mass, which remains the mystery at the centre of our salvation. The guide can be used on its own or in conjunction with the video talks of the National Catholic Mission, available at www.dailytvmass.com. It’s intended for use by Catholics looking for a deeper understanding of the Mass & their faith; parents, grandparents, and godparents; Catholic Religion Teachers; RCIA Team Leaders and members; and Small Faith Group Leaders and their members.

"The Mass: the Mystery at the Centre of Salvation" study guide and the related YouTube videos are excellent course resources for Catholic School Religion Educators looking to engage their students in a meaningful discussion of the Mass."

Michael Coutts, S.J. belongs to the Jesuits of Canada Province. Born in Bombay, he received a Bachelor’s Degree and Licentiate in Philosophy at the Pontifical Athenaeum, Pune, India. He then completed a Bachelor of Education Degree before being posted to Guyana, South America in 1969. In 1970, he studied for his Bachelor of Divinity (Honours) at the London University. He served as the Director of Manresa Jesuit Spiritual Renewal Centre in Pickering, Ontario. Fr. Coutts has worked in schools and parishes in both India and Canada. He began celebrating the Sunday Mass at CFTO in 1994 and has been celebrating the Daily TV Mass with the National Catholic Broadcasting Council (NCBC) since 2001.