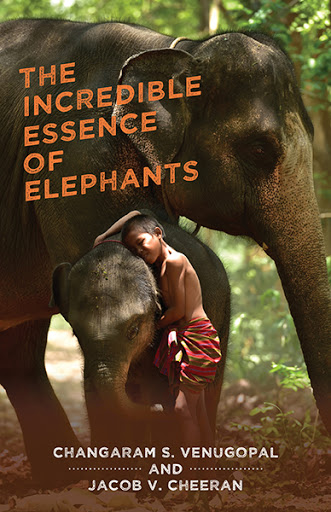 The Incredible Essence of Elephants
by Changaram S. Venugopal and Jacob V. Cheeran

Can elephants cry? Why are grandmother elephants so important? How does an elephant grieve the death of a loved one? These are just of few of the many questions people have about elephants.

The Incredible Essence of Elephants explores the fascinating and remarkable answers to these questions, and much, much more. With the expertise of two long-time veterinarians, this book offers insights into the origins of elephants; different types of elephants and their habitats; famous and influential elephants throughout history; the biology of elephants; human management and interference in elephants; and the striking similarities between the human and elephant behaviour, social development and connection, compassion, and grief.

In this newly translated book with latest fresh topics, we can learn about one of the most endearing and sometimes misunderstood animals on our planet. Through examining how elephants’ habitats are threatened and the ways they are exploited by humans, we also learn about the difficult side of human nature in how we relate to elephants. Dr. Changaram Venugopal and Dr. Jacob V. Cheeran remind us of the complexities of the animal kingdom and the power of observation.

Packed with first-hand experience and expert insights, this book is funny, informative, and thorough. The Incredible Essence of Elephants is comprehensive and enjoyable read for anyone interested in elephants.

"The Incredible Essence of Elephants" is both educational and entertaining and will be enjoyed by elephant lovers of all ages as well as scientists, veterinarians and students of veterinary medicine

Changaram Venugopal is a veterinarian and hails from Kerala State, India, where elephants are widely used in festivals. While a student, he was exposed to various ailments of elephants in veterinary clinics and through his master’s degree research project examined various pharmacological agents for immobilization of animals. After MS and PhD degrees, he continued a postdoctoral fellowship at Harvard University. In 1981 he joined Louisiana State University as a faculty until he retired in 2014 and is currently holding the Professor Emeritus status. He was awarded the Beecham Award for Research Excellence, Distinguished Faculty Scholar Award, Distinguished Alumni Award, Best Teacher Award, and a Fulbright Teaching Scholarship, as well as a patent for developing a peptide for airway diseases. He has authored more than one hundred scientific publications and is a fellow of the American Academy of Veterinary Pharmacology and Therapeutics.

Dr. Jacob V. Cheeran, a veterinarian cum pharmacologist, served as the head of the Pharmacology Department of Kerala Agricultural University and the Head of the Department of Wildlife Sciences in the College of Forestry. He was also a professor and Chairman of the Elephant Studies Center and a member of the Steering Committee of the Project Elephant and of the Central Zoo Authority of the Government of India. During his career he has tranquilized more than 500 elephants and has presented topics on elephants at several conferences around the globe. Later he was awarded a patent for an instrument that administers medicines to wild animals from a distance. He retired in 2000. During his career he has been invited to several countries, including USA (Smithsonian), UK (Royal Veterinary College), Germany, Switzerland, Netherlands, Thailand, and Australia to give seminars on elephant management, elephant immobilization, and musth in elephants, and also to attend court hearings as an elephant expert. He is a member of several international organizations including the Asian Elephant Specialist Group of IUNN and is a fellow of National Academy of Veterinary Science. He has written several books in his native tongue as well as in English and many of his personal experiences are depicted in this book.