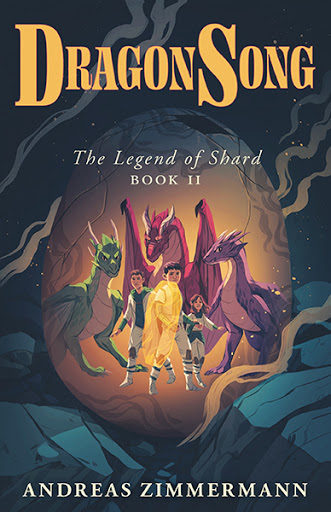 The Zedmore family is no stranger to dragons and the magical world of Shard—but this time, war is brewing.

Teens Alex and Jared and their little sister Madison are safely back on Earth after their adventures in Shard last summer, and their parents, Lynn and Eddie, want nothing more than to keep their family safe and close. This is not to be, however: they find themselves urgently summoned back to Shard while shadowy agencies pursue them on Earth.

Soon the Zedmore’s are plunged into the centre of a civil war between dragon factions and their allies. While making new friends with elves, satyrs, pixies, and one mischievous wizard named Trevistar, the Zedmore’s learn that magic runs in their blood. They race to master their unique magical abilities as the conflict on Shard worsens and threatens to spill over onto Earth. Will they master their new skills in time to be useful? And will it be enough to save their lives and stop the bloodshed?

An adventure that combines magic and intrigue, Dragon Song is the second book in the Legend of Shard series.

Andreas Zimmermann is no stranger to high adventure and worthy heroes. As a lifelong fantasy fan, he has crafted worlds and adventures as a Dungeons & Dragons enthusiast since age nine. He has been writing stories for years and is an avid player of both video and board games.

He wrote the first book of the Legend of Shard series, Dragon Law, as a love letter to his children, and was honoured to expand the story in Dragon Song. He lives in Calgary, Alberta, with his wife and children.