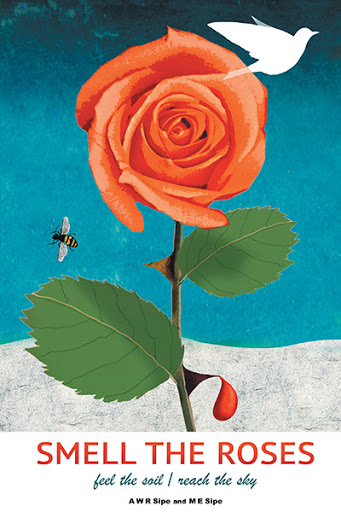 “… yes, smelling the roses – as we root ourselves firmly in life, grow into our humanity, and reach our destiny.”

“The largest task of life is to love. And love is the only thing that lasts, everything else melts away.”

“Feel the touch of Love, from all that is provided from above.

Light, heat, water, air, and love – all are life’s essentials.

What’s to happen if we do not care?”

A.W. Richard Sipe was devoted full time to research into the sexual and celibate practices of Roman Catholic bishops and priests.That path leads him to the study of the sexual teaching of the church and its effects on behavior - especially sexual abuse of minors by clergy - and the tangle of sexual problems that some people claim are blocking every religious agenda and destroying beyond repair the credibility of the Catholic Church in sexual matters.

Richard spent 18 years serving the Church as a Benedictine monk and Catholic priest. In those capacities, he was trained to deal with the mental health problems of priests.

He and Marianne married in 1970 and have one son, Walter. Both as a priest and married man he practiced psychotherapy, taught on the faculties of Major Catholic Seminaries and colleges, lectured in medical schools, and served as a consultant and expert witness in both civil and criminal cases involving the sexual abuse of minors by Catholic priests. He is listed as an expert witness in two alleged murders by priests.

Richard loved the Word, and reveals himself in self-reflection, with poems, post-eighty, publishing I CONFESS; How a very Religious Catholic Boy Learned Dirty Words Sex and Celibacy Avoided Suicide Embraced Death Found Love God & Himself Not necessarily in that Order and Courage at Three AM.

SMELL THE ROSES, feel the soil, reach the sky completes his trilogy of nearly two hundred poems. He had more poems to share but ran out of time on August 8th, 2018.

Mike graduated from St. John’s University with a BS in Accounting and Economics in 1968. With his qualifications as a CPA, CFP, financial planner, and life-wealth planner he headed his own firm, AIS Planning, until 2013 when he retired to spend more time for his priorities: family, photography, and conservation.

Mike has been inspired by and involved in his work over fifty years and nature photography for over forty. He published two books: COLLEGEVILLE, 2004, a photographic paean to his eight years in that landscape. In 2013 he published ADVOCATE PLANNING; To Do What You Love To Do, a guide to help integrate one’s total resources.

He defines Love Priorities—based on the premise that we do what we love to do—care for ourselves and others. When we prioritize our passion activities, we can focus more clearly on Self-realization (learning, serving, mentoring). In the process, we visualize how we can Connect (explore, relate, play) and pin point how we want to Give (protect, contribute, transfer).

Mike’s website www.MikeSipe.com include a down-loadable copy of Advocate Planning, his Love Priorities Blog, and a direct access to large archival landscape favorites.

A third book, tentatively titled OUR BASIN OF RELATIONS, The Art and Science of Living with Water, is a collaboration with other conservationists concerned with the preservation and renewal of Lake Champlain. it is expected in 2019.

Mike and his wife of fifty-one years, Patty, built a multi-generational home and photo studio in Richmond, Vermont. It is commodious enough to accommodate son, Michael and daughter-in-law, Jessica, both professional photographers and their three children – Avi, Emmett and Olive.

Mike and Patty’s daughter, Bridget, holds a Master’s Degree in Integrated Health Studies, training in videography and women’s health issues. The family compound has space for her and visitors.

Smell the Roses will be available in the FriesenPress Bookstore soon.