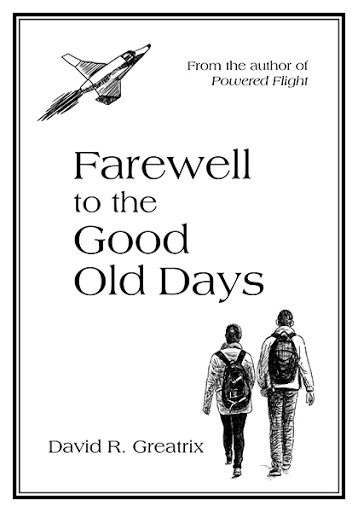 Farewell To The Good Old Days
by David R. Greatrix

Farewell to the Good Old Days is a lively and intimate tale by David Greatrix, a man who has lived a dynamic professional life, first as an aerospace engineer and then as a professor of the subject. The book, leaning heavily on the actual life experiences of Greatrix and a number of his academic colleagues close and far away, is divided into two discrete parts; the book’s narrator for both parts is nominally a fictional consolidated representation of Greatrix, drawing from various sources in addition to the author. Part One covers the narrator’s childhood and early adulthood, followed by his moving into his years of growth as a professional breaking into the challenging field of aerospace engineering. Part Two tracks the narrator’s subsequent twenty-five-year academic career as a professor of aerospace engineering at a university in a major urban centre.

Prominent in this story are the many challenges the narrator encounters in his navigation of academe in a high-profile setting for engineering education. In an emotional narrative that never strays far from various shades of humour, the narrator shares the details of his teaching and research experience at his institution, frequently bumping up against the pointy bits of an evolving cosmopolitan academic culture.

In colourful detail, the narrator reveals the small successes, notable failures, unexpected events, and crushing disappointments that describe his tenure at his university. The narrator is especially candid in his revelations about episodes of betrayal. He takes aim at big targets, including the Canadian government, university administrators, and the academic superstructure as a whole. The result is an enlightening view into an individual’s complicated experience in a demanding world that serves as a microcosm of society at large.

From the author of Powered Flight

"compelling, revealing the politics and distrust that are sometimes rampant in academia." - Foreword Clarion Reviews

David Greatrix is an air force brat and Prairie boy who did most of his early growing up in Canada’s capital and in Germany, in addition to spending a good number of his formative years as a child and adult in Winnipeg. He wrote this book in part to expose the details of a long and sometimes sticky career in academe in Canada, a career that included facing an ongoing string of professional obstacles. He considered his experiences with these and other obstacles worthy fodder for a “no-holds-barred tale of betrayal, ambition, and stupidity” that would ideally help spare others in similar circumstances from suffering the same fate.

In addition, Greatrix penned Farewell to the Good Old Days to educate individuals interested in what he considers the dubious evolution of modern university life, and on a more positive note, to inform an audience curious about engineering as a profession. Greatrix is adamant that his literary deep-dive into stories of so-called professional people behaving badly serves not only as a cautionary tale, but also as a salute to those worthy colleagues in the academic world who were sincerely trying to do the right thing.