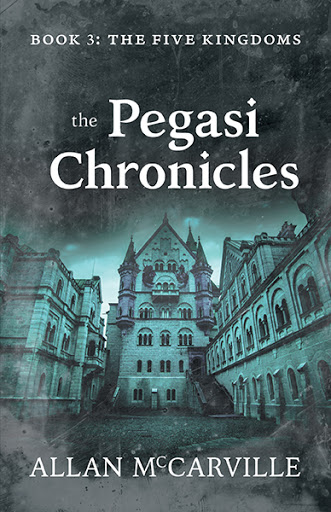 The Pegasi Chronicles
Book 3: The Five Kingdoms
by Allan McCarville

After being chased deep into a cave by the Rewera, humans possessed by demons seeking his blood, twelve-year-old Jason and his companions find themselves thrust into a strange yet familiar world. It is a world that sort of resembles late-nineteenth-century Earth; there is no electricity and no cars, but massive airships and a royal palace fill the horizon. They have arrived in River Junction, the capital of the Kingdom of Pegasus, one of the fabled Five Kingdoms. Their arrival here was not an accident, as Jason and his uncle, Richard, quickly discover that they are members of the Pegasi royal family. For a moment, it seems that they are safe, united with those who fight the darkness with their mythic blood.

However, life in the Kingdom of Pegasus is not as ideal as it would seem. Punishment is swift and harsh, even for those not proven guilty of their crimes; this spells bad news for Jason, a sometimes rebellious young boy whose energy lands him in trouble. In addition to being condemned and plunged into a nightmarish world of virtual slavery, Jason is still relentlessly pursued by the Rewera—including the vicious demon Assad, who will go to any lengths to kill Jason and prevent his destiny from unfolding. Following Jason to the Five Kingdoms, Assad receives the help of even more powerful Rewera. As part of the plot to destroy Jason, back on earth Jason’s friend Kyle is abducted to be used as a pawn to weaken the Pegasi boy’s power. An imbalance between good and evil is growing in both worlds; will Jason be perceptive enough to discover his destiny, and will he be courageous enough pursue it? 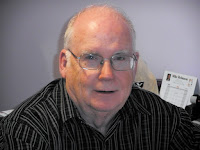 Allan McCarville is a Canadian author who has previously published The Sacred Knife (2016) and The Portal (2017), both of which are part of his ongoing fantasy/sci-fi series, The Pegasi Chronicles. He is also the author of two short stories, “The Soul Thief” and “The Encounter”, which were published by the Stittsville Creative Writing Group in June 2017. Another short story, “Plea from Beyond,” is included in an anthology entitled “Creative Musing 2018” published by the Stittsville Creative Writing Group in June 2018. Allan McCarville and his family currently reside in Stittsville, Ontario. More information on Allan McCarville’s books and upcoming projects can be found at his website: www.allansbooks.com.

The Pegasi Chronicles will be available in the FriesenPress Bookstore soon.