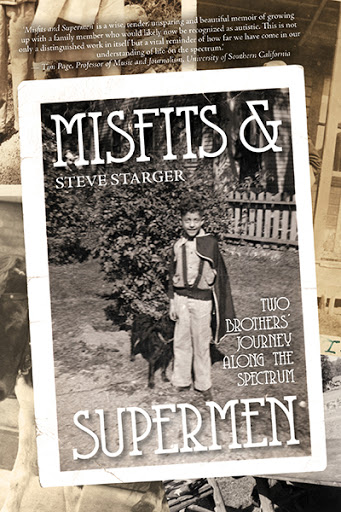 The bond of brotherhood is hard to break, but a lifetime of dealing with familial expectation, bitterness, and psychological disorders can bend and warp it into something nearly unrecognizable. This story tells the tale of two brothers: Melvyn, the elder, whose amalgamation of disorders leave him completely unable to function within society; and Stephen, the younger, whose own emotional and psychological issues are overshadowed to the point where he becomes little more than a pale and twisted reflection of his brother.

On different ends of the same spectrum, Melvyn is blissfully unaware of their troubling connection (or so his brother can only assume), but for Stephen, it is undeniable. He lives with it every day, sensing his own otherness in every twitch, outburst, and inability of his brother to overcome his inner demons. Left largely on his own to deal with his peculiarities—while carrying the burden of being “the normal one,” of whom much is expected— Stephen begins a complicated and unpredictable journey, one which will take him as far from his brother as he can manage to get, even as it brings them inexorably closer.

“This peculiar combination of family dysfunction, comic books, 1960s counterculture, and mental health makes for a unique, thoroughly engaging memoir that gets at the tragedy and dignity of our collective isolation from one another.

"Misfits and Supermen' is a wise, tender, unsparing and beautiful memoir of growing up with a family member who would likely now be recognized as autistic, but who was then considered simply mysterious and unreachable, and shunted from one hospital or nursing home to the next. Steve Starger takes us from his childhood world of private games, comic books and early rock and roll, through psychedelia and high times in New York and California and on to a distinguished career in journalism, biography and music, all the while haunted by the brother he loved and could not help. This is not only a distinguished work in itself but a vital reminder of how far we have come in our understanding of life 'on the spectrum."

Previously short-listed for the Will Eisner Award for his biography of comic-book artist Wally Wood (co-authored by David Spurlock), retired professional musician and journalist Stephen Starger hopes that Misfits and Supermen: Two Brothers' Journey Along the Spectrum—his personal story—will help other people dealing with psychological disorders to realize that they are not alone, and find solace, empathy, and insights into their personal and familial situations.

Other books by Stephen Starger: