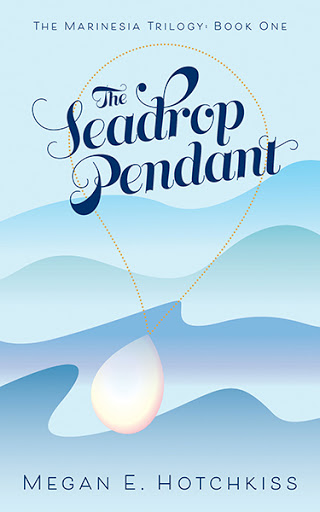 The Seadrop Pendant
The Marinesia Trilogy: Book One
by Megan E. Hotchkiss

After moving from the big city of Toronto, Ontario, to the tiny village of Peggy’s Cove, Nova Scotia, Taryn Noble expected nothing except a long, boring summer ahead.

In the magical, underwater world of Marinesia, Taryn, Kaileigh and Malcolm are quickly befriended by a clan of merfolk. It is through them that the three children learn that they are the only ones who can locate three Marinesian Artifacts that are needed to permanently seal the rift in the Barrier between Marinesia and Earth, and protect them from the evil sea serpent Leviathan, and his legions of bloodthirsty Drakken.

Time is running out. The Barrier between Marinesia and Earth is weakening, and if Leviathan manages to collect all three Artifacts, that Barrier will be blasted wide open – resulting in a cataclysmic event that will ultimately wipe out all life on both worlds.

Megan E. Hotchkiss has been telling stories since she first learned how to talk, and writing them since she was old enough to hold a pencil. Born with a rare congenital birth defect, she began making up fantasy worlds such as Marinesia as an escape from the chronic pain and discomfort of multiple surgeries and hospital visits. The Seadrop Pendant is her first published book. Megan lives in Kingston, Ontario, Canada, with her two cats.