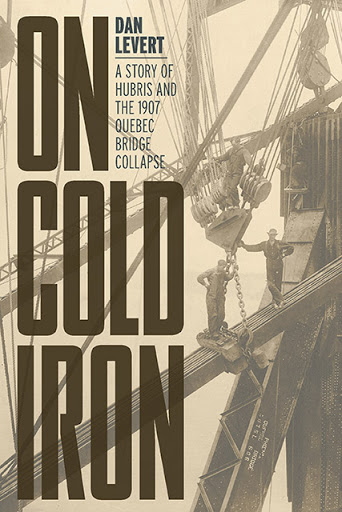 When engineering students in Canada are soon to graduate, the solemn “Ritual of the Calling of an Engineer,” penned by none other than Rudyard Kipling, charges them with their Obligation to high standards, humility, and ethics. Each budding engineer then receives an Iron Ring to be worn on the small finger of the working hand as a reminder throughout their career.

Through the story of the 1907 Quebec Bridge disaster, in which seventy-six men died, author Dan Levert teaches a powerful object lesson in what can happen when that Obligation is forgotten. Woven from transcripts of the inquiry into the collapse, the report of the commissioners, and other sources including the coroner’s inquest, On Cold Iron plays out like a fast-paced thriller. Levert recounts the original 1850s proposals to bridge the St. Lawrence near Quebec City, through the design and construction of what was to be the longest clear span bridge of any kind in the world, to its shocking collapse during construction in August 1907.

The missteps, poor policies, hubris, and wrong-headed actions begin to build like a death by a thousand cuts, until its inevitable and horrifying culmination.

The meticulously researched and deftly delivered story of this terrible historical event makes fascinating reading for anyone, but even more, it is a powerful cautionary tale and a clarion call for the obligation and responsibility of an engineer.

Dan Levert was Obligated in 1978. His rough edges, and those on his Ring, have been smoothed over with time. He has been a professional engineer since 1981. From 1998 2000, he was the president and CEO of the Canadian Council of Professional Engineers (now Engineers Canada). Dan is also a lawyer who practices construction law. He has been involved with construction all his working life and spent most of his career with a large construction company; first as an engineer designing and building structures, and then as in-house counsel. Dan and his wife Sue split their time between Canmore, Alberta and St. John’s, Newfoundland.