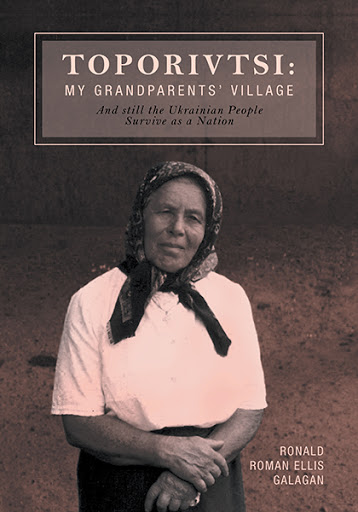 TOPORIVTSI: My Grandparents' Village
And still the Ukrainian People Survived as a Nation
by Ronald Roman Ellis Galagan

This book essentially started out as a personal voyage of discovery. Did any Galagans still remain in Ukraine after all these years and what had our Canadian ethnic Ukrainian families “missed” as a result of our grandparents immigration from Ukraine to Canada in 1900? However, this book soon evolved into trying to understand how Ukrainian society had managed to survive firstly, under despotic Austrian and Russian style imperialism and secondly, eventually under Russian style communism that has now morphed into the present day of the Russian sponsored invasion, and occupation of Ukrainian territories.

This book will be of interest to any of those who have and or believe they have relatives in Ukraine that are unknown to them. The lives of the relatives that I have discovered, and the conditions under which they have survived these many years is likely a window to the lives of many other people in Ukraine; and the unknown Ukrainian relatives of many Canadians of Ukrainian descent.

This book will also be of particular interest to those who retain a cultural attachment to the customs, religion and language of Ukraine or have an interest in things Ukrainian. For those readers who have never been to Ukraine, this book is a window into the history, economics, societal progress and evolution of a whole nation, whose current working age generation, upon new independence in 1991, had never experienced a free market economy, human rights, real ownership of land, rule of law and the freedoms that we in the West all take for granted. It is truly an almost unfathomable parallel compared to us.

Ronald (Roman) Galagan is a semi retired professional accountant (CPA, CA) who has specialized in forensic and litigation accounting for many years. The investigative nature of his specialty gave him some comfort in his ability to properly interview people. Since he is also an amateur historian, Ron appreciated the experience of seeing and feeling the culmination of the birth of a nation state rather than just reading about it. And he was very interested in understanding how the people of Ukraine had survived oppression and progressed in the approximately 100 years, since his grandparents immigrated to Canada. Ron already understood that the villagers of his grandparents time had moved from a largely semi illiterate serf/peasant society to a literate and sometimes well educated society, although at the same time remaining severely under employed, intellectually inculcated with Communism and suffering from the accompanying lack of opportunity and incentive. Ron Galagan is of part Ukrainian ethnicity, now eighty years old and lives in Edmonton with his wife May, with whom he has been married for over fifty years. Ron grew up in a rural ethnic Ukrainian community and along with May has remained connected to ethnic Ukrainian communities and their churches.

TOPORIVTSI: My Grandparents' Village will be available in the FriesenPress Bookstore soon.