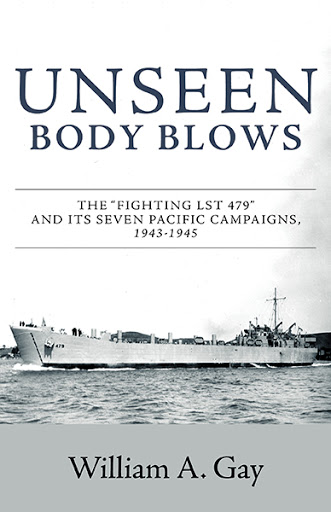 Between 1942 and 1945, 1,051 amphibious tank-landing ships were rapidly produced. These were anonymous vessels, slow and unwieldy, and in the words of one crewmember, they looked like bathtubs. At first, LSTs had a reputation of being expendable and of relatively low value, and so were bestowed another, less noble, nickname; “Large Slow Targets.” Put into service to get troops and equipment ashore, the story of LST 479 is in some respects the story of all of these ships. Typical of all early LSTs, its crew on commissioning day, April 19, 1943, consisted of raw amateurs. But over the next 1,046 days, through collisions, accidental groundings, navigational errors, and lots of mechanical breakdowns, the 479 crew became sailors. Displaying heroism and ingenuity, they rescued the crew of a crippled landing craft during an Alaskan storm, battled fires aboard a burning LST hit by kamikazes, and fought off air attacks on the way to Makin and Guam, at Saipan, in the Philippines and around Okinawa. This LST crew became the embodiment of the Navy’s 2018 recruiting slogan: “Forged by the Sea.” In gripping, meticulously researched, “you are there” fashion, author William A. Gay, recounts the fascinating history of the 479’s seven Pacific campaigns; from the day-to-day life of the men aboard her, to their terrifying encounters in battle as they delivered “unseen body blows” to the enemy that helped win the war in the Pacific.

“This book is really about people, not machines. It honors the servicemen – like Lin Gay, who crewed them – as well as the home front workers who built them. It was a very dangerous time, in battle and in production.”

“Bill Gay’s book is the tale of a diverse and geographically disparate group of youngsters called together to become a team capable of doing things for which they were not especially well prepared, to play whatever part they were assigned to get the job done. That job was to turn the tide of the war.” 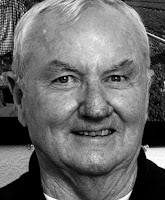 Bill Gay comes from a navy family. His late brother Jim was a retired naval officer and their father was Lin A. “Alex” Gay, LST 479 communications officer. Bill and Jim’s grandfather was commanding officer of the San Diego Naval Hospital when the author was born there. One of their uncles was a survivor of the December 7, 1941 Pearl Harbor attack. Upon graduation from the University of Missouri Naval Reserve Officers Training Corps, Bill was commissioned as an ensign in the U.S. Navy in 1968 and spent nearly four years as a surface warfare officer. After active duty, Gay spent more than twenty years in the Ready Reserve, most of it as a public affairs officer. In 1994 he retired from the Navy with the rank of commander. With a master of arts degree from the University of Redlands, and a bachelor of journalism from the University of Missouri, from 1972-1997 Gay was a reporter, editor, and finally general manager for the Imperial Valley Press. In October 1997, he and his wife, Sue, founded a public relations agency located in El Centro, California. It wasn’t until late in life that Bill’s father, Alex, began penning a history of the 479 he intended to entitle The Fighting LST 479, but sadly, Alex succumbed to congestive heart failure before he could finish it. This is the book Bill’s dad intended to write.