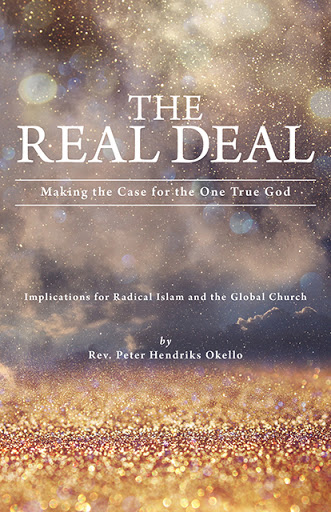 The Real Deal: Making the Case for the One True God
Implications for Radical Islam and the Global Church
by Rev. Peter Hendriks Okello

This book explains differences between the content of the Bible and the Qur’an and between the God of the Bible and Allah of the Quran. The resulting identity of Allah serves as a wake-up call for many Christians, especially for those who think that the God of the Bible and Islam’s Allah are identical. Despite growing, militant Muslim behavior throughout the world, especially against Christians and Jews, many Christian leaders in churches and politics seem to be ignorant of the growing threat of Islam to their communities. Many examples of explicit Muslim’s inhuman behavior substantiate the global Muslim threat to completely destroy Jewish and Christian communities throughout the world. This book helps readers understand that there is a significant and most strenuous spiritual battle going on in the heavenly spheres between demons (fallen angels) and angels as ministers of God. This spiritual battle is reflected in the hearts and minds of men and women today. This book suggests how Christians need to be united in a biblical response to the growing threat of militant Islam to bring the entire world under the rule of Sharia law and worship of Islam’s Allah.

"[T]his is a timely, well-written manuscript that is sure to resonate with people who are concerned about recent clashes between Christians and Muslims and want to know more about Islam, the causes of these conflicts and, most importantly, how to respond."

For twenty years, Peter worked in the heavy metal industry as a Mechanical Design Engineer and Industrial Engineer (Management Operation) in Western Europe and North America. In 1979, his transitioning from industry to ministry began with four years of Seminary education (M.Div.). During the next twenty years, he served as Pastor in various churches, while through continuing education receiving a Master’s degree (Th.M.) in Domestic Missiology (1998) and a Doctoral degree (D. Min.) in Ecclesiology. Since 2007, as Pastor emeritus, traveling for nine years, March-June, to East Africa for teaching, preaching, making field trips to villages, as well as studying and writing on development issues. In 2018, Peter expects to publish his first book, “THE REAL DEAL: Making the Case for the One, True God.” This book carries the author’s African name: Peter Hendriks Okello. Amazingly, the meaning of the name Okello, i.e. bringer of fortune, matches the prophetic message, wrapped in a vision, spoken to him during a small group gathering, “I see a man leading a camel carrying water to a far-away country…you are that person leading the camel.” These prophetic words were spoken in 2004, three years before his time in Africa.

The Real Deal: Making the Case for the One True God will be available in the FriesenPress Bookstore soon.