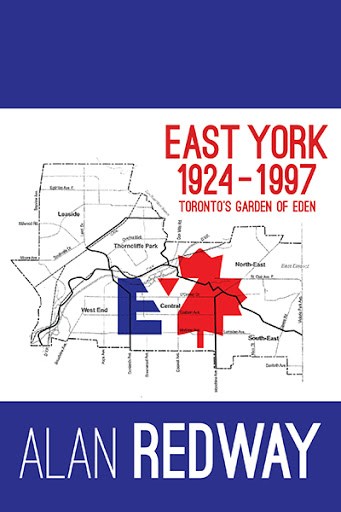 the Provincial Legislature. Prior to this, municipal administrators and politicians

protecting the cultural assets of East York. This initiative was spearheaded by

The mission of the East York Foundation is; “To contribute to the historical, cultural

and recreational enrichment of the people of East York, which encompasses the

communities of East York and Leaside”. The East York Foundation is dedicated to

the promotion of community institutions, associations and organizations. To help

do this, the Foundation assists these groups in fundraising campaigns for both

receipts can be issued by the East York Foundation to qualified donors.

The East York Foundation is operated by an elected, volunteer Board of Directors.

After more than 50 years, the East York Foundation continues to liaise and work

co-operatively with local residents, businesses, institutions and organizations. To

find out more about the East York Foundation, and to make donations to it, please

contact Gord Piercey. He can be reached at gordpiercey@hotmail.com or send

York 1924-1997: Toronto’s Garden of Eden. This is yet another tangible example

of how the East York Foundation meets its mandate and community responsibility,

and continues to play a part in the history of East York.

Born in Toronto and raised in the former Borough of East York, Alan Redway has a degree in Commerce and Finance from the University of Toronto and a law degree from Osgoode Hall. Mr. Redway served for ten years on the council of the Borough of East York, six of those years as the mayor of East York and a member of Metropolitan Toronto Council and Executive Committee. Later he was elected to the Parliament of Canada where he served for almost ten years as a Progressive Conservative member of the House of Commons and as Minister of State (Housing). He has written for Leaside Life and the East York Chronicle. In 2014 he published his first book, Governing Toronto: Bringing back the city that worked.