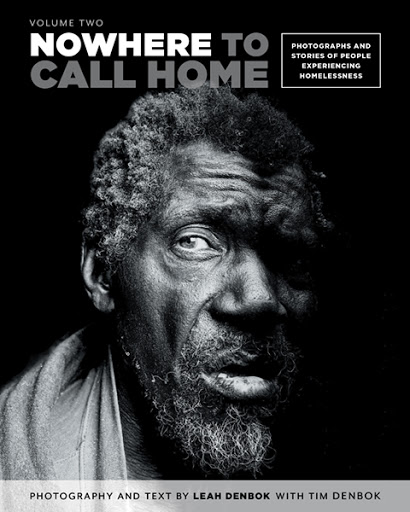 This book continues where my first book left off—with forty photographs and stories of people experiencing homelessness. It is a part of my ongoing mission, begun with volume one, to change the general public’s perception of those experiencing homelessness. So often, as I stated in my first book, they are viewed as subhuman creatures, or a lower order of being than human. Through my photographs and stories I am trying to humanize them, to help the general public see that, apart from the unfortunate circumstances in which these people find themselves, they are no different than you and I. I am heartened that, judging from the comments that my first book has received from people around the world, my work seems to be having this effect.

All royalties from this book will be given to Home Horizon: Transitional Support Program.

I am only one

But still I am one.

I cannot do everything

But still I can do something;

And because I cannot do everything

Let me not refuse to do the something that I can do.

This book is a perfect follow-up to Humanizing the Homeless, Volume One. Through these portraits and accompanying stories, Leah has made a real connection with an often-unseen population.

These photos bring to life the beauty that is within each person and drives home the fact that each life is unique and important.

Leah has a way of turning a photograph into an in-depth look into a person’s soul.

This magnificent photography project is an opportunity to, both, share and educate through pictures the voices and worldview of the homeless.

Leah’s photography is a real gift. By showing people experiencing homelessness as people, Leah makes it impossible for us to turn away—harder still to not act.

Leah is a 17-year-old Canadian photographer and author. Since the age of 13 she has been mentored by Joel Sartore, a National Geographic photographer and Fellow. For the past three years she has been travelling, with her dad, to cities throughout North America to photograph people experiencing homelessness and record their stories. In July 2017, CBC’s The National aired a mini-documentary about Leah. Since then her career has taken off. Most recently, she has been interviewed by the BBC, the Corriere della Sera (the largest newspaper in Italy), Days (a newspaper in the Netherlands), Global News, The Toronto Star, CBC radio, CBC’s The Goods, Chatelaine, Toronto Life, and Context with Lorna Dueck, to name just a few. In September 2017, she spoke to 40,000 people at the Air Canada Centre for the WE Day and WE Family events, sharing the stage with such dignitaries as Prince Harry and the former Secretary General to the UN. She has also been invited to exhibit her work and speak at the Women of the World 2018 festival in Australia. Leah lives in Collingwood, Ontario with her parents, Tim and Sara, and her brother, Daniel.

The reader can see more of Leah’s photography by visiting the following sites: