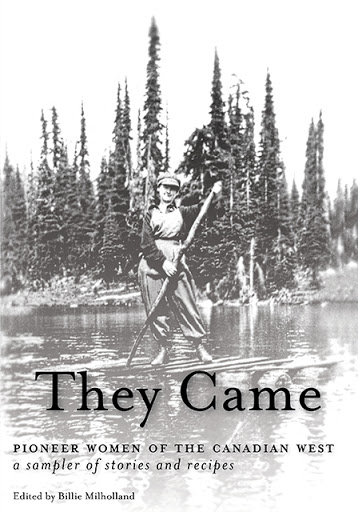 European settlement of Western Canada was both rapid and dramatic. People came from all over the world to take advantage of cheap land ($10 for 160 acres/64.7 hectares). Women most often came with parents, or followed husbands and brothers. They traded extended family life in familiar landscapes imbued with ancient histories for life in an undeveloped country with few roads and rough, new communities full of people from diverse cultures, speaking dozens of different languages.

We know the stories of men who settled and developed the West, but of the women, except for a handful of rich and famous, we know little. They Came tells the heroic stories of 113 women who came to Western Canada from somewhere else between 1890 and 1950. Following each story is a recipe, something their children and grandchildren remember fondly.

"Women in Western Canadian pioneer stories are typically invisible or mere shadows. In They Came, Billie Milholland uncovers the lives of 113 women who represent our settlement era. She paints them in vibrant colour. An important part of each story is food preparation, favourite recipes measured using the tools and technology of the time."

Billie Milholland is a communication specialist with a life-long interest in Western Canadian history.

They Came will be available in the FriesenPress Bookstore soon.