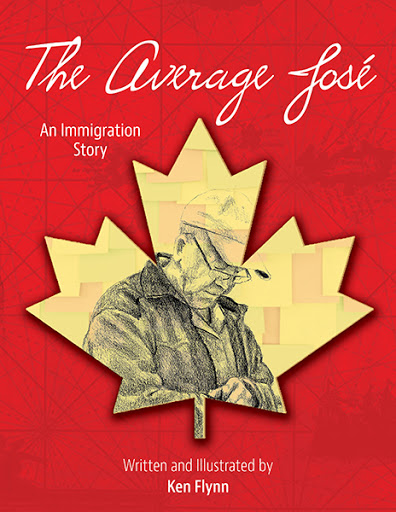 The Average José
An Immigration Story
by Ken Flynn

Canada is a nation built by immigrants, and this is the story of one such man. In the 1950s, José Pires bid farewell to his wife of five days, leaving the island of São Miguel in the Azores and coming to Canada in hopes of building a life for his future family.

Working across Canada on the Canadian Pacific Railway and Canadian National Railway, José embodied an ideal that is hard to find in today’s generation: the idea that your life should not be measured by what you achieve for yourself, but by what you leave to others. An honest, loyal man, José waited eighteen months to see his wife again – Maria, the love of his life, mother of his eventual children, and the woman he would, years later, tend to in chronic care.

Intelligent and compelling, The Average José deftly counterbalances Portuguese themes of saudade (a simultaneous sense of love and loss) and obrigado (thankfulness). It moves effortlessly between the sometimes dreamlike cultural landscape of the Azores in the forties and fifties and the realities of the Canadian immigrant experience.

Ken Flynn is an award-winning educator and a graphic artist. He lives in Milton, Ontario, with his wife and two daughters. The Average José is his first graphic novel.