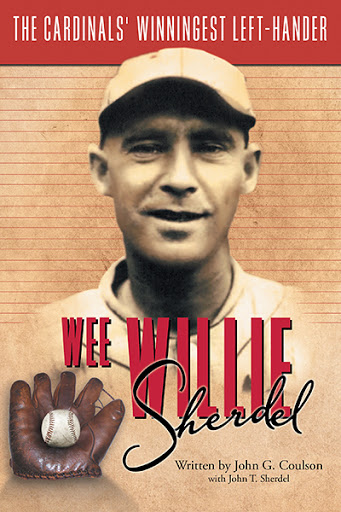 Wee Willie Sherdel was a very humble, courageous left-handed pitcher who became one of the all-time great southpaws in St. Louis Cardinals history. The son of a German blacksmith in a small Pennsylvania village, Willie’s dream was to become a major league pitcher – a rather big dream for a small boy. Not the most talented or biggest, he worked hard and learned from greats like Eddie Plank, Branch Rickey and Grover Cleveland Alexander. Sherdel’s best years were in the 1920s while Rickey was developing the farm system concept and the Cards were playing in two World Series. Known for his slow ball, Willie was given the honor of pitching the first game against Babe Ruth, Lou Gehrig and the powerful Yankees in both Series.

Although labeled a hard-luck pitcher in the Series, Sherdel performed many great feats on the diamond. Since his retirement in 1932, he remains the Redbirds’ winningest left-hander and fifth all-time winner. Willie also has pitched the third-most games and the fourth-most innings. Like all pitchers, he loved to talk about his hitting. Among Cardinals’ pitchers, Sherdel owns the fourth-most career home runs and the fifth-best batting average for his .337 in 1923.

His contemporaries included over 90 Hall of Famers and some of the greatest players of all-time including Ruth, Gehrig, Ty Cobb and Rogers Hornsby.

On Willie Sherdel the player:

“I can’t hit those soft ones and Sherdel is one fellow who will not give you any kind of a good ball to work on.”

“Sherdel had the heart of a lion working against heartbreaking hard luck.”

“Bill Sherdel, gamest of the game, and recognized as one of the best money-pitchers in baseball…”

“Sherdel is not only a southpaw, but he is one of the best pitchers in the country. He is a student of the game.”

“…his slow ball is poison to sluggers.”

“An affectionate recap of Sherdel’s life and baseball career that doesn’t lack in breadth... every chapter is packed with generous helpings of photos, quotes, and clippings from newspapers of Sherdel’s era... the book is a meticulously researched labor of love.”

“Coulson combines journalistic thoroughness with an infectious enthusiasm for the subject. He captures not only Sherdel’s athletic success, but also the history of the sport’s development and the nation’s embrace of it... well-crafted... it should be a treat for bookish, die-hard Cardinals fans.”

“As a Cardinal fan, the book really filled in a gap in the decade right before the team’s first World Series title in 1926. An excellent account of the rise of Branch Rickey and Rogers Hornsby while telling the story of an important pitcher who rose to the top right along with them.”

- Rick Zucker, President of the

“A fascinating new book has been written about Wee Willie Sherdel -- Bill Sherdel, the Cardinals’ left-hander -- and it is written by John Coulson and it’s just a wonderful, wonderful book.”

“I am reading your book and enjoying it immensely. I can’t believe the research you did to reconstruct Willie Sherdel’s life. My hat is off to you.”

The Spirit of St. Louis: A History of the St. Louis Cardinals and Browns

Author John G. Coulson resides in Hanover, Pennsylvania. He has been involved with baseball his whole life as a player, coach and fan. He claims he held a baseball bat before a pencil. His earliest memories include running around the bases while his father was coaching a state championship team. John graduated from Millersville State College and spent his first career in banking technology. As a writer he previously wrote the book Hanover Raiders about the class D Blue Ridge League. He is a member of the Society for American Baseball Research.

John T. Sherdel is the grandson of Wee Willie and lives in New Oxford, Pennsylvania. He continues to promote the memory of his grandfather and remains a lifelong St. Louis Cardinals fan.