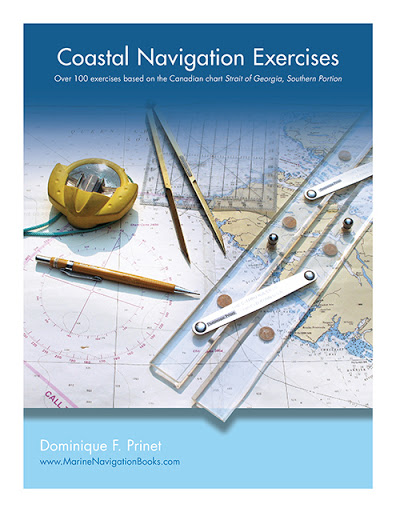 Coastal Navigation Exercises
Over 100 exercises based on the Canadian chart Strait of Georgia, Southern Portion
by Dominique F. Prinet

Coastal Navigation Exercises is based on the notes and exercises prepared for students during some 15 years of teaching marine navigation to sailors and professional mariners.

The data tables needed to do the exercises are given in the Appendix of this manual. Most of the exercises require the Canadian marine chart CHS 3463, Strait of Georgia, Southern Portion, published under the authority of Canadian Hydrographic Services and available through chart retailers. A list of over 500 CHS retailers in Canada, the US, the UK, and Japan is available from www.charts.gc.ca/charts-cartes/dealerdepositaire-eng.asp.

The exercises are grouped in six sessions corresponding to the six sessions of the Power Point presentation. This presentation can be freely downloaded from the web site www.MarineNavigationBooks.com, and reproduces the images illustrating the course book (Costal Navigation for Class and Home Study) as well as the exercises in this manual. Each question is on one slide, and the answer on the next one.

Dominique Prinet practiced navigation as a commercial pilot in Europe and in Canada, first along the West Coast of British Columbia, and then, for several years, in the Canadian Arctic and High Arctic, from a base in Yellowknife. He holds an Air Transport Pilot license, and celebrated his 70th birthday by obtaining his helicopter licence and flying another 100 hours. Dominique flew around the Americas in a two-seater plane, crossed Africa in a small jeep, sailed across the Atlantic using a sextant, and navigated in the Mediterranean, the Indian Ocean, the British Channel, the Caribbean, along the West Coast of Canada and around Vancouver Island. Dominique holds a BASc from UBC and an MBA from McGill. He taught at McGill for 12 years, and continued for a while at UBC and Simon Fraser. Dominique was a VP at Canadian Airlines, in Vancouver, and went on to spend five years in Africa, managing and turning-around Air Tanzania. He is an Instructor-Evaluator for Sail Canada, has taught boating out of Vancouver from 2000 to 2015, and has delivered many Transport Canada courses to professional mariners. Sharing a life-long passion for teaching, Dominique lives in Vancouver, B.C., with his wife who was teaching French at UBC until her retirement in 2014.