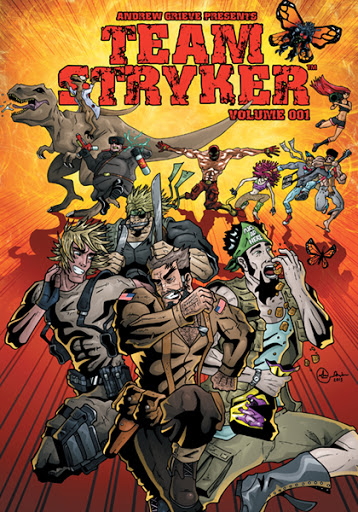 Team Stryker Volume 001 collects the first five issues of the ground breaking webcomic, Team Stryker. Started as a webcomic in 2012, Team Stryker focuses on the adventures of four overly American soldiers Eagleheart, Deadeye, Casanova and V-Scope. In each issue Team Stryker faces off against deadly foes such a velociraptor in a lab coat or the dreaded hipster assassins known as The Hip Squad. Pages are added weekly to www.teamstrykercomic.com which is currently on its ninth issue.

Andrew Grieve studied at the Vancouver Art Institute and has a diploma in Video Game Art and Design with a Foundation in Design. While in art school, Andrew and his close friends came up with a video game concept that would become Team Stryker. In 2008 Andrew drew the first issue of Team Stryker as wedding gift for one of his friends and continued making Team Stryker out of demand by his friends and family. After completing the third issue Andrew decided to turn Team Stryker into a webcomic in 2012 and has since completed eight issues of Team Stryker with no end in sight.

Team Stryker Volume 001 has been nominated by our staff as one of their favorite books.