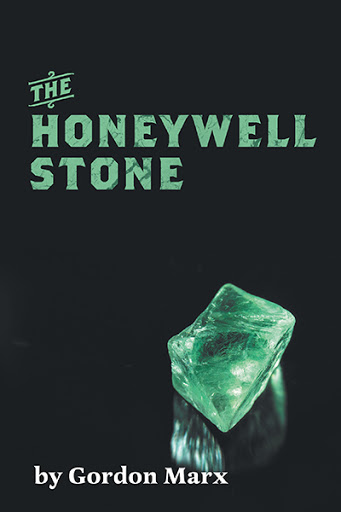 The Honeywell Stone
by Gordon Marx

The stone that became known as "The Honeywell Stone" was first captured by a Honeywell ancestor during the war of the dark ages. Once The Honeywells captured it, they never let it out of their possession, ever. The stone, green in color with what appeared to be a tiny flame flickering inside it had one particular quality. Whoever possessed it would never find themselves short of money.

The Honeywells got so used to having it that they carelessly left it on the mantle in the living room where a young cowboy working on the ranch found it one day. He had been told of it's peculiar qualities by the buxom teen-aged daughter of Homer Honeywell. The cowboy scooped it up and took off to join his three companions who were at that time unemployed. There was a history to the stone that claimed if the stone was stollen, the perpetrators always ended up being killed. But the four young cowboys decided to take their chances.

The Honeywell Stone is coming out as my second novel but it wasn't the second one I wrote. I have written several novels now and I enjoy writing them more than any other thing I do. There is a very short amount of time between finishing one novel and coming up with the idea for the next one.

Once, someone requested that I write a short article on a subject he gave me. Twenty minutes later I handed him the finished work. He said,

"I thought you'd take a week to think about what to write."

"I replied, "I don't have to think about what to write, I just write it.

The Honeywell Stone will be available in the FriesenPress Bookstore soon.