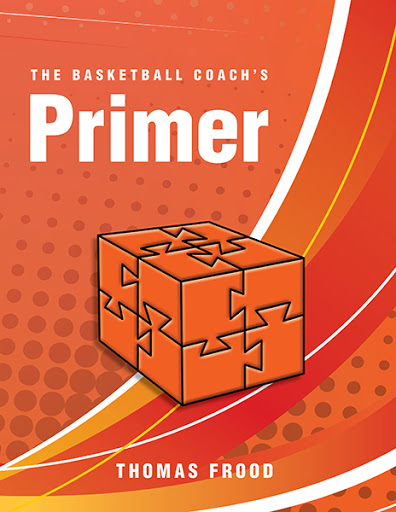 The Basketball Coach’s Primer is a resource of basketball ideas. It is written for coaches ready to review the principles and methods of the game before getting started with a new team, or for renewing coaches reviewing for the next season of basketball. Reviewing and renewing to gain greater understanding makes the game better for all the people of basketball. The basketball content or substance herein is not the authoritative “last” word but this study puts forward the important ideas for developing the players and the game at a fundamental level. This resource provides a synopsis of essentials, including a comprehensive outline of the basic maneuvers and processes for developing the skills and mobility of the players. A substantial quantity of relevant game-specific basketball applications are added to the mix of ideas for good measure. The Basketball Coach’s Primer also lays the basis for a more advanced game if needed.

Thomas Frood started coaching basketball a bit earlier than most coaches and gained his playing experience somewhat later than most players. Although keenly interested in individual sports from an early beginning, the “fire” for team-play did not really ignite until he was called upon as a first-year freshman student at Queen’s University to play for and, indeed, coach his house-league intramural basketball team. Certainly, there was much to learn, both technically and from the point of view of playing with and leading a team of enthusiastic peers. This innocuous house-league intramural start was the beginning of a wonderful basketball journey that has lasted a lifetime.

After graduating from Queen’s Thomas Frood began his professional career teaching physics and mathematics at Ernestown Secondary School, a high school situated near Kingston Ontario where he was also called upon to coach the school’s senior basketball team. Over the ensuing years the Ernestown Eagles representing Eastern Ontario qualified for the All-Ontario Championships six times. Soon thereafter and with an uncanny sensation of déjà vu his basketball journey wended its way back to Queen’s University where it had begun more than a decade and a half before. He was given the opportunity to take on a two-year interim task of coaching the Queen’s varsity men’s basketball team. Queen’s University at Kingston competed with other Ontario and Quebec university teams, such as, Toronto, York, Ryerson, McGill, Ottawa, Laurentian, and Carleton in league play, and played many other teams from across Canada, the USA, and several European teams in exhibition games. After the sojourn at Queen’s, Thomas Frood returned to his teaching and administrative duties at ESS as well as some more basketball coaching, continuing to mentor players and school teams. Regardless of the age and level of the players being coached he believes the following coaching truism to be the basis for developing.

Success seems to come to players and teams steeped in the fundamentals, having fun, sharing, and working hard with collaborative purpose in a smart way while being motivated by worthwhile achievable goals.

Now retired, but still a coach at heart, Thomas Frood has found coaching to be like an exciting journey across a vast and varied terrain having the capacity to give the traveler many enjoyable views, visitations, and intrinsic rewards. This coaching journey seems to be a nonstop swirl of ideas and events eddying onward to other important levels of awareness and satisfaction. He has written The Basketball Coach’s Primer as a resource for coaches to share the knowledge and experiences of a wonderful journey.