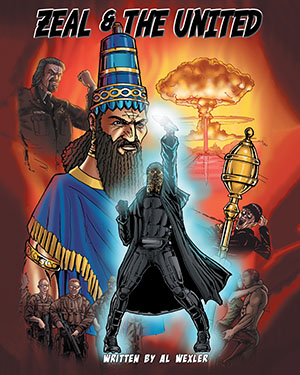 9/11 was with answered with an unlawful Invasion. Post-invasion Iraq is now in chaos. It was a mistake that will haunt the globe for generations.

American intervention has become a bastion of peace in the Cradle of Civilization. The only hope for the Middle East and the rest of the world is...ZEAL & THE UNITED! Join our heroes, Jeff and his US Special Forces Unit, on their journey from the Highways of Death in Iraq to the gritty streets of Los Angeles as they become a super powered force. Only they can stop tyranny and terror from taking root on national soil.

Al Wexler (born Alfonso Way Jr) is a born and raised Native Washingtonian. After graduating high school in Clinton, Maryland, Mr. Wexler attended the Virginia Tech in where he studied and received his Bachelor of Arts degree in Communication, Mass Media and Film. There, he also co-wrote and directed his first original screenplay which was filmed in Blacksburg, Virginia. While writing his next several spec scripts, Mr. Wexler parleyed his knowledge of Communication and Information Technology into the video game industry at BioWare Mythic, several political campaigns and PC giant, Dell. His unwavering passion to see his scripts into novels has churned out Zeal & The United. With ongoing support on his fans, Mr. Wexler plans to release sequels related to Zeal along with the horror graphic novel entitled 'When I See the Blood'.