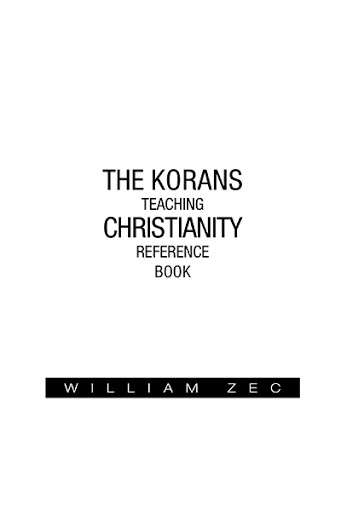 If we are in the last days that both the Koran and the Bible speak of, then it is more urgent than ever to study the words of God and to follow only His will. The path to Hell is paved by ignorance of God’s Word and by the influence of corrupt people seeking to twist the scripture to their own ends, with deception and misinterpretation.

Understanding the Koran through scriptures, that God gave us throughout time will open the eyes of true Muslims as it did mine, to the meaning of the messages given by the Prophet Muhammad.

The responsibility to study all the Holy teachings are yours! Only you can pray for yourself to receive guidance, understanding and discernment between truth and lies of those whose who sway influence and power over you. Only you alone will stand before God at Judgment Day to receive your punishment or reward for your actions and beliefs you will not be able to blame others for your lack of understanding or misperceptions of God’s Words because they are before you to read.

The leaders of the people who love God, have a duty to guide the people by the Word Of God and to learn with them the will of God through the study of all scriptures. It is God’s will that we know Him and follow His teachings. We are told by the prophet Hosea 6:6 and Matthew 9:12 to 13 and also in the Koran Sura Winds 51:46 to 60 [Therefore seek God]. With this in mind a man studying the Koran without having a Bible as a reference point to go back to,could be compared to a fish with no fins,it may be able to move but it will not get far or move very fast.

This book try’s to help you live this Will of God by opening the teachings of the Koran to the Bible.

I do not speak or read Arabic. I am not Arab nor am I a Muslim, but I am a man who seeks the Word Of God.

I did read the Koran a number of times and had many discussions with Muslims on the job sites. I found that they were very interested in my Christian viewpoints and what the Bible had to say on certain topics.

I was led to writing this book by the interest shown, when some Muslim men asked if I had an old Bible that they could borrow? I went out and bought them all new Bibles so that they would have a truly full understanding of the Koran.

I studied two English translated Koran’s, to get the best understanding of the passages. I ask your forgiveness if the translations may differ slightly from the original Koran in Arabic.

Because the numbering system spans a number of lines, in the Koran’s I have, that I could not be more precise when quoting a passage. I count on your love of God to patiently find the line quoted and to be enriched by the scriptures that deal with the topic.