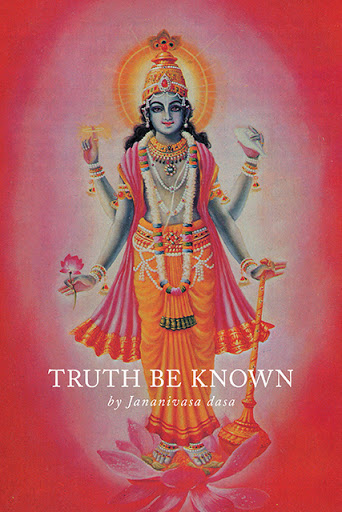 Truth Be Known
by Jananivasa dasa

“It is said that truth is stranger than fiction but this opinion is due only to incomplete knowledge. Relative to the eternal spiritual reality, nothing is stranger than a world whose people are uneducated in conclusive spiritual truth. Lacking the qualifications required for reception of perfect knowledge, most people of this world are totally oblivious to the nature of spiritual subject matters, much less have they a clue of the identity of God. Spiritual understanding is lacking because the object of understanding is unknown. Indeed, most people of this illusory world would not know the Supreme Spiritual Person even if He were standing before them. It is instructed by the Vedic authority that the first qualification for reception of perfect spiritual truth and knowledge is simply to admit our bewildered condition. Because it is only the Absolute Truth who can save this world from certain destruction, this book was written to give people a chance to see what they do not know. References from the Vedic scriptures are provided as proof but the real

fool proof approach to Absolute Spiritual Truth is to receive the knowledge directly from the Vedas. It is due to divine design that the Eternal Spiritual Reality has until now, until this dawning age of enlightenment, remained unknown to the conditioned residents of this criminal world. As instructed in the “Aquarian Gospel of Jesus the Christ”; “There are many mysteries in Christ consciousness, but there are no mysteries in God consciousness.”

I do not consider myself an accomplished author or even qualified to present the Truth to a world addicted to illusion, but since no one else is doing it, I feel compelled to try. I admit my frailties in the matters of mundane education; I just never considered it to be very important and who would have guessed that I was right? It is now being exposed on public television that practically everything we have learned in school is either wrong, flawed or simply insignificant. For me, however, everything changed in one day. Some forty years ago I came in contact with a copy of the Bhagavad-gita while walking through the Denver airport. Henry David Thoreau has declared that compared to the stupendous philosophy of the Bhagavad-gita, this modern world and its' literature seem puny and trivial. I am forever grateful to the girl who insisted that I purchase this authentic presentation of the original and eternal identity of God. My real life began on that day. Since then I have become increasingly enchanted with this philosophy of the Absolute Truth and the self-evident transcendental science which proves His eternal identity.The omnipresent and ever blissful Krishna is inconceivable by any means other than the transcendental approach and the Bhagavad-gita, along with the subsequent Vedic scriptures, provide opportunity for traversing that ecstatic transcendental path. This humble book delves into the proof of God's original identity as well as His visible presence in India only five thousand years ago. The Vedic science teaches that ignorance is a derivative of the word ignore. The Vedas warn that if human society continues to ignore the self-evident proof of God's identity, then they will continue to ignore His orders and this continuation of ignorance and sin will soon cause a great dissolution on this planet.The so-called author of this humble attempt to share the truth of everything with everyone, is simply concerned for the welfare of everyone, especially including myself. The Vedas present self-realization as the purpose of human life. Self-realization is described as realizing one's true spiritual self in eternal devotional relationship with the presence of Krishna within oneself.

Truth Be Known will be available in the FriesenPress Bookstore soon.