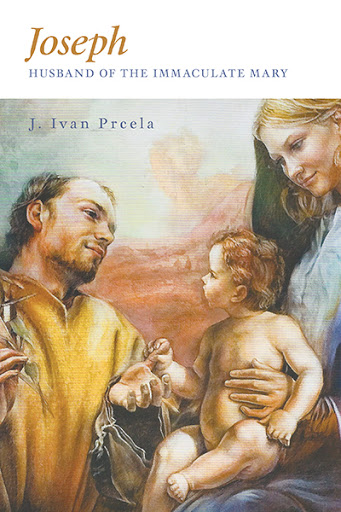 Joseph, Husband of the Immaculate Mary
by J. Ivan Prcela

In today’s universal crisis of marriage and family, this profound Josephological book contains sixteen well researched chapters. Four of these chapters deal with the Covenant of Love between Joseph of Nazareth and the Blessed Virgin Mary. The book has also five chapters on the supernatural fatherhood of Joseph, the Righteous Man and Savior of the life of the Savior of the World. Joseph, after the Heavenly Father, is the Best Exemplar to all heads of family and teaches them how to be the faithful husbands, defenders, protectors and providing fathers of their families. This book’s concluding chapter, “The New Song of the Immaculate Conception,” is exceptionally unique, challenging and inspirational. Another unique feature of the present work is the Annotated Bibliography. This section gives the readers an insightful paragraph about each of the book’s thirty-five entries that had inspired the author to write this and also previous two books of his St Joseph Trilogy. All three books were brought to light by FriesenPress!

"This (J. Prcela's first) book about St. Joseph is singular in its structure, in its methodology, in its freedom and in the treatment of various chapters. It should be said that it is a fascinating book, whether one agrees or not with the opinions or, better yet, with the convictions of its author who radiates sincerity and, most of all, shows his enthusiasm for St. Joseph."

John (baptismal name Ivan) Prcela was born in 1922 in Košute-Trilj, Croatia. He graduated from the eight-year Franciscan Classical Gymnasium-Seminary in the historic Town of Sinj in July 1944. J. Prcela completed one year of theology in Makarska, Croatia, and two additional years in Rome, Italy. On October 20, 1949, he left the Franciscan Order and, on December 23, 1949, immigrated into the United States and settled in Chicago. On July 9, 1951, he moved to Cleveland, Ohio, where, at John Carroll University, he finished his undergraduate studies in June 1954. He obtained his Master of Arts Degree from Western Reserve University in spring of 1957. Prcela was a high school teacher for thirty-four years; first four years at St. Edward High School in Lakewood, Ohio, and other thirty years in the South Euclid-Lyndhurst City School District, at Charles F. Brush High School from 1958-1983 and at Memorial Junior High from 1983-1988.

In December 1963, John Prcela got married in Carcagente (Valencia), Spain and, in Greater Cleveland, fathered four children and retired in 1988; he became a widower on July 6, 2002. For decades, he has written prolifically in English and Croatian. After more than seventy years of study and reflection, Prcela published two books on the Mystery of St. Joseph and now that he is ninety-four years “young” — here he comes out with the third book of his St. Joseph Trilogy.