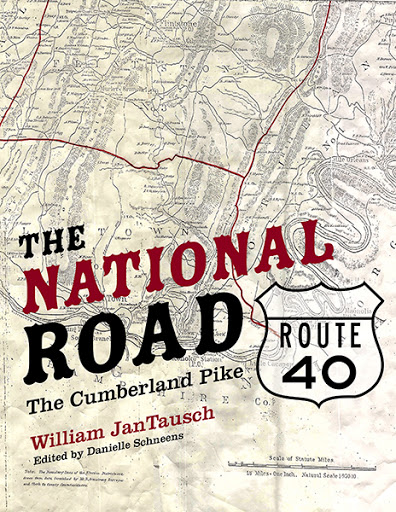 The National Road/Route 40
The Cumberland Pike
by William Jantausch

William JanTausch delivers a historical, photographic account of part of the National Road, otherwise known as Route 40. Built in the early 1800s, the National Road extends from Cumberland, Maryland to Vandalia, Illinois and contains many long, forgotten sites and structures along the way. Although JanTausch's photography style is simplistic, he encourages the viewer to engage with the ordinary in an unordinary way, to bring the forgotten back to the present day.

"The National Road is an ambitious subject for one photographer to undertake. As with other artists who have devoted themselves to a particular place or subject, the depth in Bill’s book is a result of an ongoing and rich dialogue that he has had with the road for the past several years. Bill’s photographs are deceivingly simple and they remind me of a quote by the artist Ad Reinhardt, “seeing is not as easy as it looks.” It is often the case in photography that the most direct, honest and insightful views are also the most elusive. As it was with Eugene Atget’s Paris and William Christenberry’s Alabama, the National Road is imbued with history and complexity—what is required of the photographer is to allow these qualities to emerge. In the best of his photographs, Bill has struck the balance between information and art—a little this way or a little that—finding the spot where the subject seems to show itself. In his multiple trips back and forth along the National Road, Bill arrived with a collection of photographs that stand as testaments to the journey, like road signs inviting the viewer to look again and again and find new destinations therein."

"I would like to start by stating that on behalf of our Society, Lindsay and myself, it has been an absolute pleasure to spend time getting to know Bill and his wife. Bill has undertaken a wonderful project and any aid we may have been in bringing his vision to fruition has been a privilege and an honor. The old national road is such a dynamic and complex tale whose value and impact on our young republic can never be forgotten or underestimated. Bill, through his keen eye and art, has attempted to bring back relics of the past to our modern eye. In my humble opinion he has done so with flying colors."

William (Bill) Joseph Jantausch was born and raised in Newark, New Jersey before moving to Delaware, Ohio to earn his bachelor’s degree in botany-bacteriology at Ohio Wesleyan University. He graduated in 1969 and made Delaware, Ohio his home. He spent the first 20 years of his career in traffic and distribution in the private sector and in the 1990’s entered the real estate market by purchasing several properties. Since, his primary occupation has been real estate management. Throughout his life he has had an interest in photography, but it was not until later in life that he took this interest and made it into a close to full-time hobby. His interest peaked about fifteen years ago when he built a dark room and print lab from scratch in his office and following that began taking courses, first through local organizations, and eventually he returned to his alma mater to dabble in digital imaging, photography, and bookmaking. He audited a number of courses while at Ohio Wesleyan this time and there he developed interest in observing and imitating other artists in attempts to develop his own style. It was there that his craft was refined and he began working on several series projects–most notable–“Forgotten Places”. The project, focusing on various places including an old sawmill and rural parts of central Ohio, was eventually featured at Ohio Wesleyan University as an exhibit, which was the first for Bill. He has continued on to more notable projects including the book that you hold in your hands about the Cumberland Highway (or more commonly known as Route 40). As you flip through the pages, you will find that Bill’s work captures often haunting images of scenery, carefully framed structures, and a clever documentary style. He now sees the love of creating with the camera as the driving factor in his life. Bill lives with his wife, Kim, and cats Gracie and Sinatra in Delaware, Ohio. He has two grown children: Michael and Sarah.