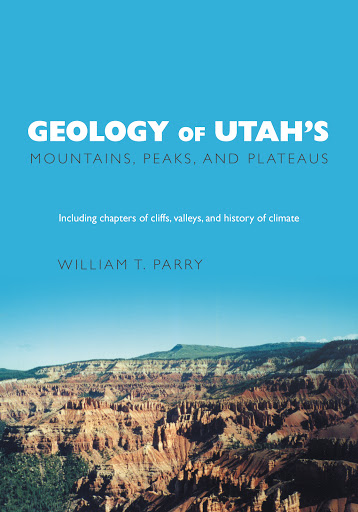 Geology of Utah's Mountains, Peaks, and Plateaus
Including descriptions of cliffs, valleys, and climate history
by William T. Parry

Utah’s landscape is among the most spectacular in the world. It is a region of prominent peaks, sweeping valleys, dramatic canyons, and plateaus rimmed by sheer cliffs. Unique among western states, Utah’s landscape includes the Colorado Plateau, Basin and Range, and Rocky Mountains geologic provinces. Exposed rocks tell the geologic story of the region’s basement structures, overlying surface features, and rock sequences that have contributed to sculpting the appearance of today's landscape. Rocks and formations record the evolution of the western part of the North American continent, and give clues to the nature of ancient crustal basement and Earth’s deeper layers. Climate change has shaped the present landscape through the erosional power of ancient glaciers and the presence of today’s large lakes and basins.

Geology of Utah introduces the state’s deep earth, plate tectonics, and the development of its ancient mountains. It describes the geology of the three main geological provinces, ancient elevations, cliffs, valleys, and the history of the region’s climate. This book will enrich the experience of enthusiastic amateur geologists who want to understand and explore the development of Utah's highlands and the history of this dynamic landscape.

William Parry is Professor Emeritus of Geology and Geophysics at the University of Utah, Salt Lake City. He is a recognized expert on the geology of Utah and the author of A Hiking Guide to the Geology of the Wasatch and Geology of Utah's Rivers. He is an avid hiker, skier, and fly fisherman.