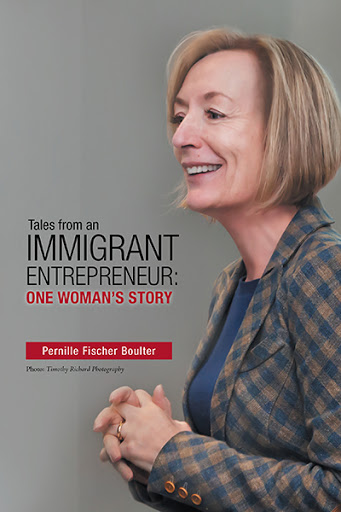 What if you were a well-educated, multi-lingual, widely travelled, and successful businessperson, who fell in love with someone from overseas, got married, and moved to a new country, only to find that because you “came from away” none of your skills or prior achievements were valued? That’s what happened to Danish immigrant Pernille Fischer Boulter when she arrived in Canada in 1998. But raised by parents who valued self-reliance, curiosity about other cultures, meaningful work, and engagement and enthusiasm for life, Pernille determined to reinvent herself and thrive in her new world. To begin with, she made a list of the top one hundred CEOs and entrepreneurs in Atlantic Canada, and called every single person on it. From this humbling first step she was to be named one of 25 Top Women of Influence Inc. ©.

Lively, instructional, inspirational, and abounding with wit and wisdom, Tales from an Immigrant Entrepreneur chronicles Pernille’s inspirational rise. A beacon of light, it offers hands-on advice and suggestions, clearly outlines what sorts of bumps in the road are likely to emerge, and provides thoughtful and imaginative ideas on how to navigate them. It’s a great Canadian success story that gives credit to the mentors who helped along the

way, while also providing an illuminating look at the missteps, hard work, and innovation that figured in.

​"Tales from an Immigrant Entrepreneur is an engrossing story that is steeped in honesty and rich with insight. Fischer Boulter’s immigrant’s tale is a model of perseverance from someone who has achieved a great deal on her own but who has never forgotten her support network along the way." Foreword Clarion Review

Pernille Fischer Boulter founded Kisserup International Trade Roots www.kisserup.com in 1998, She is a Subject Matter Expert on Entrepreneurship and Export development and has worked with small, micro and medium businesses in over 90 countries worldwide.

She is an immigrant entrepreneur, keynote speaker, volunteer mentor and is passionate about music, dogs and elephants.