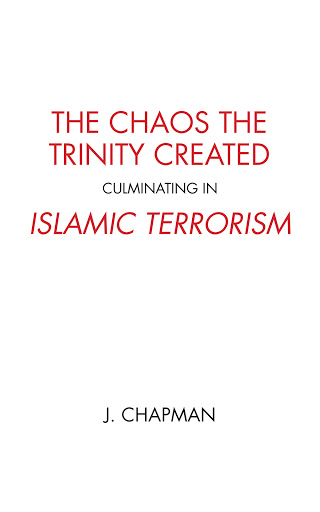 The Chaos the Trinity Created culminating in Islamic Terrorism
by J. Chapman

Islamic terrorism is spreading world wide, soon to be in our neighborhoods.

In the 1930s when Hitler came to power few spoke in opposition against him, the result was WWII. Today our Governments and the media, who both subject themselves to political correctness, are not looking into the real roots of what causes the growth of Islamic terrorism. It is not poverty, the poor man cannot afford guns, rockets, and bombs. Neither is it being uneducated, a bombing in Scotland was orchestrated by doctors. The vast majority of terrorists today are Muslims, why, and what do Christians have to do with it?

Whether one believes in God or not, understanding what your neighbor believes, and why, is of paramount importance to peace in this ever-shrinking world. Multiculturalism cannot work when one of those culture's objectives is domination. Violence is not the answer, education is, but are we willing to make the effort to understand or are we going to see WWIII?

This book is a simplified comparison of the books that Muslims and Christians respectively submit themselves to, the Qur'an/Koran, and the Bible.

I was raised without any concept of a God or religion. My great grandmother, who lived with us at the time, died when I was about the age of seven. At the time we lived three blocks from the cemetery so I learned early in life that we all eventually die. Unfortunately this knowledge created in me an uncaring attitude, I grew up without a sense of purpose. Years later I read a book that frequently quoted the Bible so out of curiosity I read the Bible. This curiosity turned into a strong driving force to learn the truth about God, religion, and religious differences.

Learning about God and man's differing ideas of Him has given me a much better understanding about why men do things they do, both good and bad. My personal focus changed from being self centered to being a little more world conscious. Having a personal relationship with God is exciting now that I can finally understand God's purpose in creating man, and what man's purpose in life is.