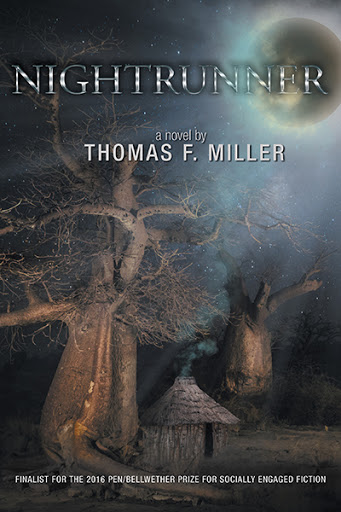 Set in East Africa in the late 1990s, NIGHTRUNNER, is part love story, part road adventure, part quest. After escaping an abusive relationship and surviving a difficult and dangerous journey through Uganda and across the border into Nairobi, Sarra Sialo learns the great city has its own dangers and that, for a young woman, every opportunity for education or work comes at a price. Sarra decides that if her striking beauty is to be considered a commodity, it is she who will reap the profits, but she never forgets the strangers who have helped her, often at great sacrifice, in her quest for a better life. Middle-aged American accountant Jackson Price is widowed when an over-loaded coal truck collides head-on with his wife’s car. When he is offered a two-year stint in Africa with a foundation that supplies support funding for start-up enterprises, Jack snatches at the opportunity to escape from his grief. Shortly after he arrives in Kenya, Jack and Sarra meet, and their mutual, instant attraction confuses, excites, and terrifies them both. They join forces for a road trip into remote parts of Kenya, each for selfish and self-gratifying reasons, but along the way, they discover they share one deeply-ingrained value neither can escape: To stand against injustice by taking action, doing whatever is in one’s power, however large or small. NIGHTRUNNER is also a love story between two people different in every way – race, economic class, education level and age.

“NIGHTRUNNER” lifts the reader beyond his/her own skin, into life in Africa – its sounds, smells, loves and losses. With a strong woman placed right at the center, author Thomas Miller weaves a story of human poignancy and magical fantasy, leaving the reader to decide: is Sarra a Nightrunner or is she not?” Nancy O. Andrews, President and CEO, the Low Income Investment Fund

“A gifted writer’s daring exploration of life circumstances and identity different from his own. Nightrunner is audacious and rewarding, a book whose title may characterize its author as aptly as its protagonist.” Jeffrey Brenzel, Yale University, Lecturer in Philosophy and Humanities

“NIGHTRUNNER” reflects Tom Miller’s passion and love for East Africa - its people, its wildlife, its landscape and most of all its many cultures and all the mythical stories.  This is a wonderful first novel by a man who clearly fell in love with East Africa and loved his time there before returning to his Kentucky roots.” Katharine Pearson Criss - former Representative for East Africa of the Ford Foundation and Senior Fellow of the Center for Rural Strategies

“NIGHTRUNNER” is a marvelous, page-flipping story in and of itself, but the character development is simply breath-taking. Not only will the reader quickly come to “know” Sarra, but he will be able to sense her coming into the next scene.  This is tale-telling at its finest.” Fred Beste, CEO of the general partners of Mid-Atlantic Venture Funds, Bethlehem, PA.

"NIGHTRUNNER” is easily the most well-written and best fiction read I have experienced in over a decade and that includes over 100 "best sellers". It literally took me into Africa on a ride that was often as thrilling as any roller coaster while, simultaneously, giving my emotions a very thorough work-out.”  (Ike Adams, syndicated newspaper columnist, freelance writer and retired Appalachian nonprofit Development/Marketing Executive)

Thomas F. Miller retired from going to an office to be with his wife of 47 years on the shoulder of a knob in rural Kentucky. As a certified public accountant, he devoted many years to social change work in Appalachia and Africa, worked 14 years with the Ford Foundation and lived ten years in East Africa. In 2015 he earned a Masters of Fine Arts degree from Eastern Kentucky University. In 2016, “NIGHTRUNNER” was nominated in the top ten finalists for the prestigious PEN/Bellwether Prize for Socially Engaged Fiction, founded by Barbara Kingsolver. This is his first novel.