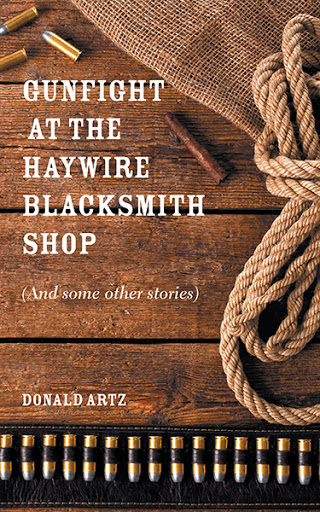 Thought-provoking, humorous, and only a half-step away from reality, this collection of short stories by Donald Artz tours the reader through a world of delightfully flawed characters, bizarre scenarios, and overly bureaucratic solutions. The pieces span genres and history, offering a diverse look at the types of problems that have niggled humanity since the beginning of time. The first two stories are fun Western spoofs, taking us to the town of Haywire, where cowboys wearing overly tight hats use their guns and acting skills to settle age-old debates concerning physics and the cosmos. The next chapter stars a former military and maritime rescue helicopter pilot who, shortly after his retirement, is faced by absurd rules and outlandish claims that interfere with his ability to help others. In Chapter 4, people in the great country of Um are facing national unrest due to greed, which has caused economic inequality, homelessness, and all-around misery. Everything seems to go well when the government abolishes all greedy behaviors—that is, until a mysterious space object triggers some old feelings. The final chapter takes us back to 1495 BCE, where the Shaw’k Mou’-ned, captain of the Pride of Sidon, makes an unfortunate (but completely understandable) error in judgment that leads to some lessons learned. Short, sweet, and packed with allegories, Gunfight at the Haywire Blacksmith Shop will make you laugh as you ponder the joys and follies of being human.

Donald Artz was born and raised on a ranch in eastern Montana. Now retired, he once worked as a crop duster and charter pilot. Having spent a lot of time waiting around at airports all over much of the US and Canada, he began writing thought-provoking short stories to pass the time. As a fruition of these creative airport endeavors, Gunfight at the Haywire Blacksmith Shop was born. He continues to enjoy writing, and looking into the future, he quotes an author friend of his when he says, “I’ve got couple more books rattling around in my head.” He currently resides in Montana, where he shares a home with his wife, three cats, and dog. When he’s not writing, he can be found trying to teach his cats to do high fives and fist bumps, but with only limited success.

Gunfight at the Haywire Blacksmith Shop will be available in the FriesenPress Bookstore soon.