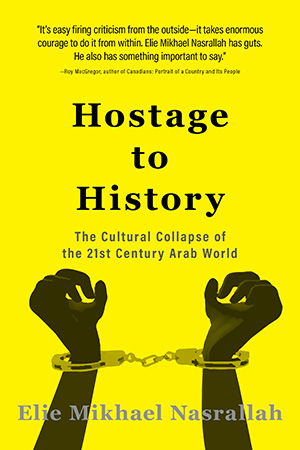 People, like you, all over the world are asking a serious question, demanding a credible answer: what happened to Arab culture and its peoples? Elie Mikhael Nasrallah addresses this subject as a son of that culture and as a critic from within. “What is wrong, really wrong, with the Arab world” he asks. ”The theme of this book is: it’s the culture, stupid!” Like a social science surgeon, he takes the reader into the dark alleys of contemporary Arab cultural conditions and political collapse. In fact, he shows how the lack of freedom, women’s oppression, sexual repression, illiteracy, political tyranny, outdated educational system, the mixing of religion and politics, and the curse of oil have all led to present-day catastrophic upheaval and Arab state-system disintegration, destruction and decay in most Arab lands. He provides readers with a 12-point prescription for salvaging a civilization that has lost its way and needs to re-join modernity and history.

"It's easy firing criticism from the outside—it takes enormous courage to do it from within. Elie Mikhael Nasrallah has guts. He also has something important to say."

—Roy MacGregor, author of Canadians: Portrait of a Country and Its People

"Mr. Nasrallah offers a roadmap that can help restore order and progressively establish a democratic system, based on the culture and traditions of the region. An excellent in-depth analysis and a praise-worthy initiative."

"A complex socio-political research ..... intriguing, insightful, poignant, intellectually-driven, and mind-enriching. Elie M. Nasrallah says it all in the brilliant title of his latest book, "Hostage to History: The Cultural Collapse of the 21st Century Arab World" How can a simplistic analysis be utilized in a world region which—for many centuries—has been plagued by hegemonic regimes and ruthless forms of governships? Well, it is almost impossible to do so! However, the author tried genuinely to endeavor in a root cause analysis of the dilemmas and redundant debacles shadowing the Arab World while driving it into a deeper societal regression instead of seeking a renaissance that will sustain progress, promote growth and ensure self-sufficiency. Mr. Nasrallah's book covers many sensitive facets, of which some are untouchable in the Arab World ..... Be it religious indoctrination & bigotry, sectarianism, illiteracy, sexual repression & gender discrimination, poverty & malnutrition, environmental mischiefs, economic injustice, and more...! A comparative model is drawn between the ailing Arab World and other evolving yet stable societies. Subsequently, the book offers numerous corrective actions based on constructive self-critique, accountability, assuming responsibility and fostering a collective willingness to overcome monumental hurdles while adopting a versatile socio-economic system with embedded democratic and humanistic values. The author's extensive work is commendable, his output offers added value in understanding contemporary events, and his findings/recommendations are merited."

"[Nasrallah] delivers his ideas with a refreshing bluntness, confident that his generalizations and his observations make sense. He knows the Arabs once were world leaders in science and literature; one millennium ago it appeared they had a far greater future than the Europeans. But today they are hobbled by ancient attitudes....a remarkable book."

Elie Mikhael Nasrallah, born in Lebanon, graduated from Carleton University in Ottawa, with an honours degree in political science. He also obtained a post-graduate certificate in Regulatory Law Administration from Algonquin College. He has been practicing since 1998 as a Regulated Canadian Immigration Consultant in the City of Ottawa, Canada. He has published two previous books: “My Arab Spring, My Canada,” co-authored in 2012, “None of the Above.” He is also a writer and commentator for major newspapers in North America and the Middle East. He has published in the Globe and Mail, The Montreal Gazette, The Toronto Star, The Ottawa Citizen, Huffington Post, The Daily Star in Beirut, Al-Ahram in Egypt, Annahar of Lebanon. He is a public speaker and a media personality in Canada and in the Middle East, appearing frequently on major media outlets. www.eliemnasrallah.com