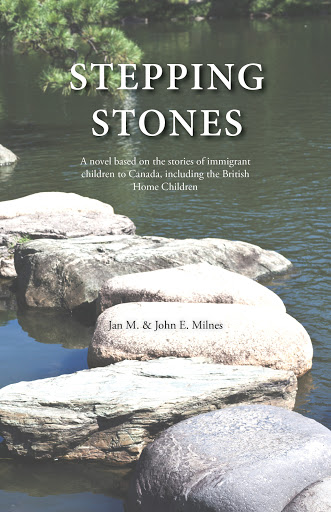 Stepping Stones
A novel based on the stories of immigrant children to Canada, including the British Home Children
by John E. Milnes and Jan M. Milnes

With the emergence of the Industrial Revolution in Great Britain came increased riches for the wealthy and desperate poverty for the poor. The Industrial Revolution was, in fact, the creation of mass production of goods previously generated by cottage industries. Large numbers of rural people followed the job route becoming the new urban poor. As a result of many varied reasons hordes of children found themselves living on the streets of the cities. The British Government, in a valiant attempt to help these lost souls, entered into an agreement with the Canadian Government, resulting in large numbers of British children emigrating to Canada in the new world.

These were to become known as the British Home Children because they largely started out in a philanthropic home. Some even migrated through other means, as will be seen in the case of John Buchan, a significant character in this novel. The authors determined that the wealth of books presently available did not truly reflect the reality of the situation to which these children were subjected. Through this novel they hope to generate a greater interest in the children who were to play a large part in forming the demographic of an emerging nation. In Ontario alone 1 in 10 are believed to be descendants of these children.

As teachers and farmers this couple experienced the building of a farm in Eastern Ontario. Immigrants themselves they purchased a 200 acre farm that had not been worked for many years. The hours were long and the rewards small but the satisfaction was immense. John became the founding President of the Ontario Cow/Calf Association and the President of the Ontario Horse Owners Association. On the professional scene he was chosen as the Chief Negotiator for the Elementary Teachers in his School Board. Jan, equally as involved professionally, became the President of the Women Teachers' Association in the same School Board. After retirement from their profession, they chose to live in Baja, Mexico for the winter months and lived close to the poor in that nation.

Both Jan & John were directors of the Eastern Ontario British Home Child organization, an organization that participated in causing these children to be recognized, in Ontario, through a day designated in their name. September 28th is the designated day and people all across the province can now celebrate a connection with their historic roots. This is a couple who have rubbed shoulders with those who were relocated from the slums, those dwelling within the inner ring roads of a large British city. The folk from the slums, lacking wealth, were relocated to an unfamiliar environment, a British Council House Estate. Jan & John became involved in the emergence of this community into the mainstream of British society.

Stepping Stones will be available in the FriesenPress Bookstore soon.