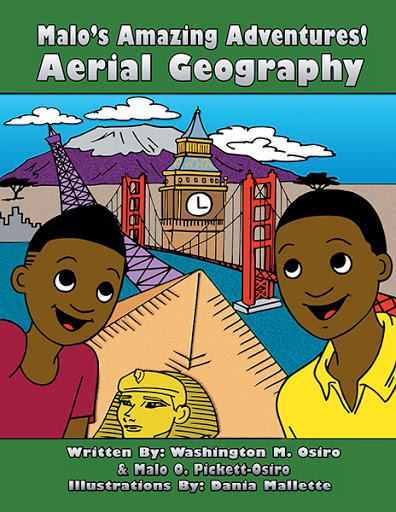 In this episode of "Malo’s Amazing Adventures!", our global explorers Malo and his dad travel from San Francisco, USA to Nairobi, Kenya for Malo’s first trip to his father’s country of birth.

The trip exposes Malo to the diversity and richness of the world around him including the different cities, languages, clothing, countries, cultures, and foods. Along the flightpath, our young traveler also sees the different monuments and landmarks linked to the different countries along the route to Kenya.

Malo sees the engineering wonder, California’s own Golden Gate Bridge shortly after taking off. He wakes up several hours later to the majestic spiral of Big Ben and the Thames River as the plane flies over London. The southern and northern coastlines of the Mediterranean Sea signals Malo’s exit from Europe and entrance into Africa respectively. Malo then sees the mighty Nile River snaking southwards with the great Pyramids in the background.

It is an experience that provides Malo with a real-life Geography and History lesson.

Read on to find out what lessons Malo learns as he travels back to Kenya, his father’s country of birth; the same country where the late father of Barack H. Obama, America’s first bi-racial and 44th president was also born.

Malo and his father team up for another global adventure in this latest edition of "Malo's Amazing Adventures!"

Born on April 23, 2003 to an American mother and a Kenyan father, Malo developed a keen awareness of the differences – obvious and not-so-obvious – between father and son, that only increased as he grew older. It is this awareness that prompts the young man’s probing and insightful questions; questions that form the basis of this series of books.

Now in Middle School, Malo is not as obsessed with LEGO® or MineCraft® as he was when the first two books of the series were written but he still makes time for either.

The young adventurer has two step-sisters: Kiersten and Genea; two step-brothers: Andrew and Tyler and a step-father: Steve.

Malo's Amazing Adventures! will be available in the FriesenPress Bookstore soon.