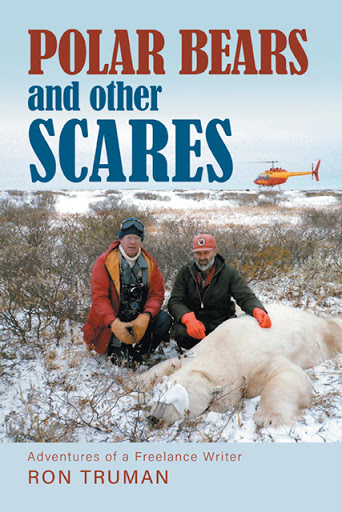 Polar Bears and Other Scares is the memoir of Ron Truman, who began freelance writing when bored with his day job. He parlayed his writing ability into a 40-year communications career. Seeking excitement and novelty, he welcomed hazards and avoided humdrum. For The Globe and Mail he wrote about adventure sports, hunting, guns, skiing, women, children, and underwater archaeology. For Landmarks, a geographic magazine, he tagged polar bears, hunted moose, and hand-fed snapping turtles. He guided foreign journalists on Canadian adventures. The memoir contains thrilling anecdotes and humorous tales. Terrorism, nukes and plagues entered his writing life. As Provincial Director of Emergency Information he participated in exercises simulating nuclear accidents and international terrorism. A crisis communicator, he was in the thick of 9-11 and SARS. Drawn into the energy sector as speechwriter for Ontario energy ministers, he eventually became Director of Project Development for the world’s largest solar farm. The memoir is an insider’s perspective on newsworthy events. One of the first writers to popularize stroke information, his memoir covers his own devastating heart failure and catastrophic strokes. One stroke almost killed him. A blood clot had to be vacuumed out of his brain to save his life. His experience writing for the Heart and Stroke Foundation brings an edge of compelling credibility to his tale of personal cardiovascular calamities. The author’s work is in a collection “of national and historic importance” held by the Ontario Provincial Archives and Public Archives of Canada. This book is part of the backstory.

Ron Truman was born to write. Forty years a freelancer. He hit his stride at The Globe and Mail in the late 1970s. After selling more than 500 feature stories to Canada’s national newspaper, he left the paper in the early 1980s. When The Globe and Mail featured Truman in one of their “Well written, well read” advertisements, they described him as a “versatile” writer. Readers agreed. After he left the newspaper, when people familiar with his writing needed help, they offered him communications-related work in unusual fields and leading-edge areas. He got jobs that were not only unadvertised but sometimes previously unheard-of. The result was a career that was all over the map, but always based on a foundation of writing. Ron and Elaine Truman live in Belleville, Ontario. They spend winters in Florida where Ron plays croquet and does a newsletter for his club. And writes.