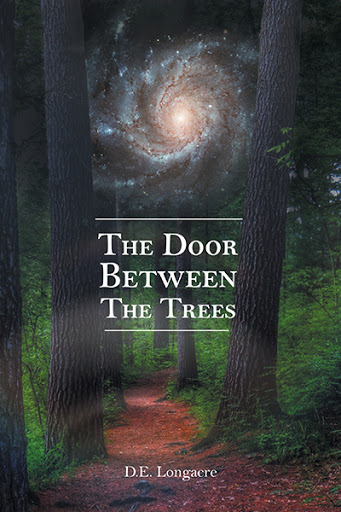 The Door Between the Trees
by D. E. Longacre

Charles H. Sinclair, plagued by the death of his fiancée, tries to find meaning by burying himself in his career. One foggy morning he hits a deer on the turnpike and wakes to find himself in a Lenape village. The son of a Presbyterian minister, Charles is unprepared for the temptations of this strange land. He is cast into a life-and-death struggle against the dark forces of the Ebenmoloch and the followers of the ancient Canaanite god, Baal.

Charles learns two other men from Earth crossed into the land before him. Ian, a blacksmith from the American Revolution, and Nathanael, a preacher from the 1730s, help Charles in the fight. Much to their surprise, the Ebenmoloch has the aide of two individuals from Earth as well; a mechanical-eyed Hessian soldier and the beautiful warrior, Golden Dawn.

THE DOOR BETWEEN THE TREES asks if love can endure time and separation. It probes what happens in the heart of a man cut off from his world and all he knows. Can a heart in bondage to lust find genuine love? Can reason withstand the dilemmas of time dilation and Einstein’s relativity, amidst a conflict of good and evil? Can one man make a difference?

D.E. Longacre grew up in suburban Philadelphia and currently lives in Chambersburg, Pennsylvania. He knows the deep struggle many have to do good despite the evil lurking within themselves. He has degrees in philosophy, religion, Bible and counseling, and has spent twenty eight years in pastoral ministry and Christian counseling helping individuals address inner conflicts. Writing from this knowledge, there is a gritty realism in his work.

A lover of the works of writers like George MacDonald, Charles Williams, C.S. Lewis and J.R.R. Tolkien, as well as Dostoyevsky, Michael Moorcock and Edgar Rice Burroughs, he attempts to combine realism with the fantastic. Pushing Science Fiction beyond its present forms, he combines a Christian worldview with a harsh portrayal of human nature. He is committed to expanding a new genre: Christian Science Fiction.

The Door Between the Trees will be available in the FriesenPress Bookstore soon.