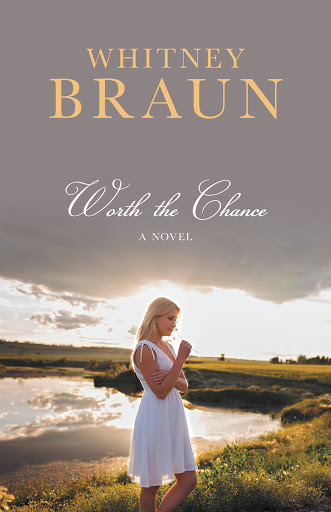 Worth the Chance
A Novel by Whitney Braun

SOPHIE REMPEL has finally settled in as Sethburn, Saskatchewan’s resident matchmaker. Her business is growing, along with her list of successful matches, but spending all her time finding other people’s soul mates has left her little time to find her own. Watching her sister fall in love only serves as yet another reminder of what’s missing in her own life. So when the opportunity arises to prove Sethburn’s serial dater wrong about true love, Sophie jumps at the challenge, hoping to distract herself from her own problems.

Logan Fraser promised himself he’d never be tied down to a woman. After his mother’s betrayal, he has no intentions of ever trusting another female again. Instead, he is content living simply on his cattle ranch surrounded by friends, his father, and a guitar. He doesn’t need a God who only disappoints or a wife who will do the same thing.

But when a woman unlike all the rest catches his eye, Logan rethinks his promise.

But Logan’s anger has festered for a long time, long enough that he’s not sure he’ll be able to forgive, even if he wants to. Will a new connection and a fragile faith be enough to withstand a visit from the past?

WHITNEY BRAUN is a country girl through and through, whose passion for writing fiction began in

the third grade. Her experiences of growing up in a British Columbia farm town provide unlimited inspiration for her stories. Whitney currently resides on an acreage outside of her hometown of Fort St. John, BC, with her husband and their ridiculously spoiled farm cat, Rascal. When not reading or writing, she can be found outside, playing slow pitch and golfing in the summer, and with skis strapped to her feet in the winter.

Worth the Chance will be available in the FriesenPress Bookstore soon.