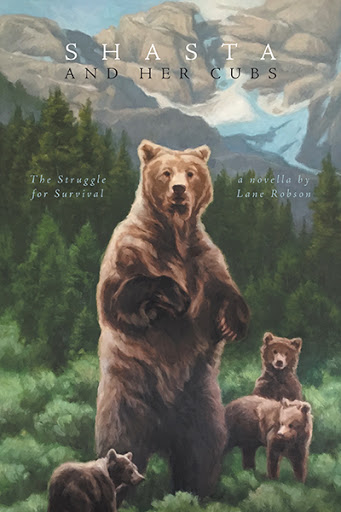 Shasta and Her Cubs
The Struggle for Survival by Lane Robson

One morning in early spring, high in the unforgiving Canadian Rocky Mountains, a young bear gives birth to her first cubs.

There are three of them, each hairless, blind, and helpless. Shasta and Her Cubs is the story of that mother’s struggles to keep herself and her three cubs alive until they reach maturity.

But, working against her are her own inexperience, hungry predators, the jagged landscape, the effects of climate change, and, worst of all, man. The story of Shasta and her cubs’ lives is a classic tale of survival from a truly unique perspective.

Shasta and Her Cubs is an ambitious, moving, modern story of life and motherhood in a quintessentially northern environment. Written with all the insights of a long-time pediatrician and dedicated outdoorsman, Shasta and Her Cubs is a mature, exciting, and accomplished book for true fans of writing, wildlife, and the wilderness.

Dr. Lane Robson is an academic paediatrician who refined his skills in writing by authoring and publishing over six hundred medical articles. He has also published articles on postal history, William Blake, and CS Lewis. He won the Geldert medal for philatelic writing in 2012.

His successful professional non-fiction book Stop Washing the Sheets aids parents struggling with the problem of bedwetting, and his 2014 fantasy novel The Prophecy tells the story of a lost colony of Vikings in the Canadian arctic.

After travelling and practicing medicine all over the world, Dr. Robson has settled back in his hometown of Calgary with his partner Louise.