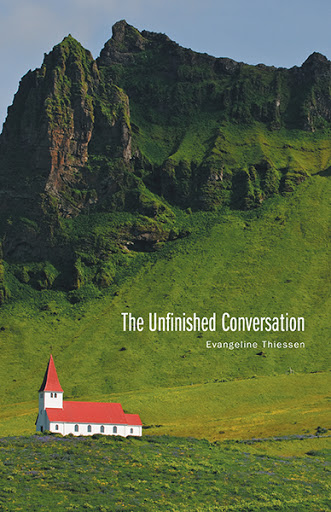 The Unfinished Conversation
by Evangeline Thiessen

Brought up in a strict fundamentalist household, Evangeline Thiessen, like many Christians, found herself at odds with complex dogma that kept her from a lucid understanding of her relationship with God. It was the death of her father, himself a former minister, that finally brought her troubling spiritual disconnect into sharp focus and set her on a path that would afford her a new understanding of her own faith.

Stepping away from the petrified state of twenty-first century fundamentalist Christian thought, she decided to re-examine the Greco-Judeo-Christian roots from which modern Christianity has grown. What she found was that a great deal of what informs the many far flung Christian denominations has very little basis in the gospel of Christ. These other influences can, however, be explained and even understood if one is willing to look at the broader contexts from which they arose.

The tone and message of the remarkable spiritual conversation started by Jesus has been shifted and stifled over the centuries, but for those willing to listen it can still be discerned.

The Unfinished Conversation is at once erudite and readable. It is an invitation for Christians to reconnect with the still-vital core of faith voiced two thousand years ago.

Evangeline Thiessen lives and writes in Vancouver, British Columbia. Her first book, The Altars of Ahaz, came out in 2007.