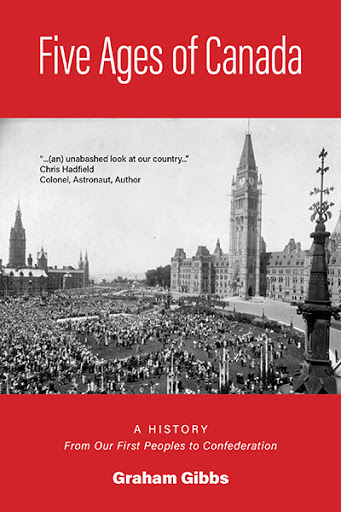 Five Ages of Canada tells the comprehensive tale of the nation’s origins and formation. Graham’s First Age introduces Canada’s First Inhabitants: the Palaeo-Indians from Northern Asia, their descendants, and the First Nations, Inuit and Métis peoples of today. The Second Age began in the early 1500s with fishing fleets from England, France, Portugal and the Basque region of Spain who spent their summers fishing offshore Newfoundland. One hundred years later permanent British settlements were established in our Atlantic Province. Samuel de Champlain’s efforts to create New France and the battle for dominion between England and France, constitutes Graham’s Third Age, and his Fourth Age covers the fur trade that was responsible for the exploration, mapping and eventual settlement of the west. Lastly, the Fifth Age — which Graham calls “The Road to Confederation” — is the story of Sir John A. Macdonald, George-Étienne Cartier and the other Fathers of Confederation. It is also the story of the Royal Canadian Mounted Police, legendary Métis leader Louis Riel and much more.

Having long been passionate about the country’s history, Graham and his wife Jay travelled 40,000 km in a Roadtrek camper van, visiting over two hundred historic and heritage sites and countless museums, throughout Canada. Graham’s book draws on journal notes, conversations with locals, and research.

Vast in its scope yet personal in its perspective, Five of Ages of Canada illuminates the country’s past in a riveting and original way, garnering deep appreciation and admiration for the people who were here first, and those who strove to achieve independent nationhood.

In this book Graham tells the story of Canada in terms of five distinct and progressive eras — his Five Ages — to Confederation coast-to-coast.

WONDERFUL! I could not put it down! The writing is clear, concise, with no extra flowery prose. It reads like a suspense novel in some respects – leading you into the next page, section or chapter. History was never as much fun as this book.

Dr. Bob Ryerson, an award winning scientist and senior executive with a first degree in Geography and History. 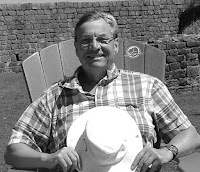 Born in Britain, Graham Gibbs is proud to be Canadian, and has been a citizen since 1975. After immigrating to Canada in his mid-twenties armed with an Electronics Engineering degree, he held senior marketing and management positions at the Canadian Marconi Company in Montreal. In 1983 he was selected to participate in the unique two week Governor General’s Canadian Leadership Conference for emerging leaders. Graham’s enduring ambition to promote Canada abroad was fulfilled in 1988 when, after a national competition, he joined what would soon become the Canadian Space Agency. Working from Washington, DC, he represented the Canadian Space Program for twenty-two years. Among other honours, he received NASA’s highest award for non-employees, the Exceptional Service Medal. Graham and his wife, Jay, returned to Canada in 2010, where he retired eighteen months later.

Graham has written professionally and for pleasure his entire adult life. In addition to reports and studies, he has authored more than fifty papers and articles, as well as a book of marketing lessons that was published in 1997. His personal works include three short autobiographical books, and articles that include recounting his experiences on a scuba diving expedition at Cobb Seamount (300km off the Oregon coast), running the world’s northernmost marathon on Baffin Island, and hiking England coast-to-coast. Graham says that Five Ages of Canada has been his most in-depth and rewarding writing experience to date.

Five Ages of Canada will be available in the FriesenPress Bookstore soon.