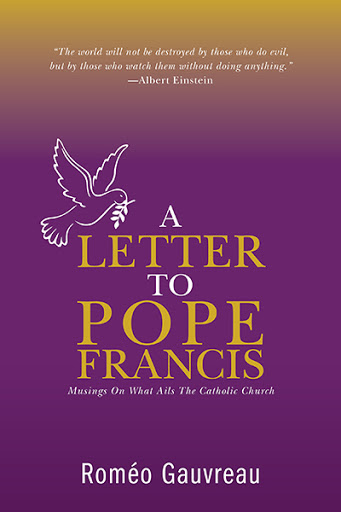 In this book, the author shares his honest and personal opinions concerning certain attitudes and doctrines of the Catholic religion. His goal in writing this book is not to try to instruct or indoctrinate you. Rather, he wishes to present you with a menu of theories, reflections, and facts he has observed as an ex-Catholic; one who is a staunch believer in the 2600-year-old Golden Rule: “Do unto others as you would have them do unto you.” Somehow the Catholic Church has betrayed that rule and finds herself in deep trouble.

The criminal conduct of tens of thousands of priests and the Vatican’s cover-up of their actions has become one of the world’s biggest scandals. The Vatican must now follow the United Nations’ directive to open up its files concerning the sexual abuse of children by priests. In the last few years alone, legal suits related to this abuse have amounted to billions of dollars. The Church could end up monetarily bankrupt ... if not morally. But we have a new player on the scene: Pope Francis. He is a nonconformist and shows signs that he is ready to face the music and do whatever it takes to save the ailing Church. Will he overcome the misogynistic attitude of his Church and allow the marriage of priests and the ordination of women?

Born on a farm in rural Québec, Roméo Gauvreau got a Bachelor of Arts degree in a Catholic seminary. After graduation, he worked for Québec Hydro for five years in various positions, including being an assistant operator of sub-stations and a junior interviewer in the hiring department. Then in 1965, he was offered a position by the regional school board of Carleton, Québec to go and teach in a secondary school. He taught for six years and quit. He felt like an accomplice in the deformation of our youth by the public school system. Following that, he moved to British Columbia where he became an owner-operator of an appliance repair service for 20 years. He then worked in construction and retired at 55. Throughout most of his life, he suffered from bipolar disorder. But in 2009, a new psychiatrist found the right medication to finally give him peace and stability. That’s when he started writing, and hasn’t stopped yet.

A Letter to Pope Francis will be available in the FriesenPress Bookstore soon.