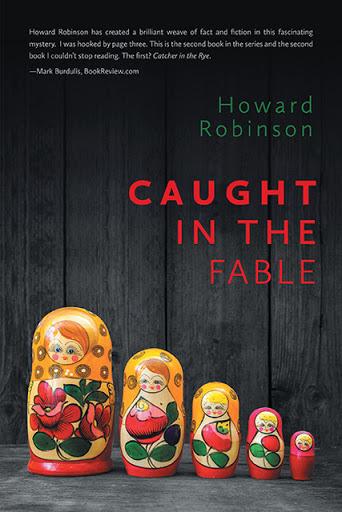 Caught In The Fable
by Howard Robinson

It is June of 2002, and Jacob Martin, a Denver-based Private Detective, has been contacted by a client about a very old missing persons case. In January of 1950 the client's father, Hollis Wilson, abruptly disappeared from his home in Albuquerque and was never seen again. Hollis had been a noted nuclear scientist who had worked on the A-bomb at Los Alamos with Robert Oppenheimer.

Within days the FBI assigned a Special Agent, but in the end there were no leads, no sightings, no ransom notes. The FBI theorized that Hollis had in fact been a spy, along with his colleague the infamous Klaus Fuchs, who at the time was being tried for treason in a British court. Hollis, the FBI felt, had simply gone to ground before being found out. It was, after all, the era of Alger Hiss and the Rosenbergs.

The client is not buying it, however, and claims that new evidence has surfaced that could exonerate his father. Jacob, intrigued by this new development, agrees to take a look.

As he visits the old scenes, however, the case takes on an unexpected dark turn, and all of a sudden Jacob is caught up in at least one gruesome murder, maybe more, and the search for a killer who soon puts Jacob's own life in jeopardy.

Howard Robinson has created a brilliant weave of fact and fiction in this fascinating mystery. I was hooked by page three. This is the second book in the series and the second book I couldn’t stop reading. The first? Catcher in the Rye.

Howard Robinson, a native Coloradan, was educated at Brigham Young University and at the State University of New York. He has been a teacher, a market research analyst, a regional sales representative, and a corporate manager. He was an employee of the LDS Church for twenty-seven years in various Regional and Area offices. In connection with these assignments, he and his family spent nearly ten years living overseas in Ecuador, Peru, Mexico and the Philippines. He and his wife, Maryetta, have had four children and (to date) sixteen grandchildren. He continues to live in the city of Jacob Martin.

Caught In The Fable will be available in the FriesenPress Bookstore soon.